Summary: The Cab Bus is NCE's Throttle Network protocol. It is a polled network which supports up to 63 addresses. In addition to NCE, Wangrow's System One and PSI's DYNATROL also employed the Cab Bus protocol. A subset of the Cab Bus is the Control Bus used to link boosters together.

The Cab Bus is a serial communications protocol developed by NCE and used by Wangrow Electronics' SystemOne. Other DCC manufacturers adopted the Cab Bus as well, such as PSI's DYNATROL

In addition to NCE, Wangrow's System One and PSI's DYNATROL also employed the Cab Bus protocol. There are two physical forms of the Cab Bus wiring. The Contol bus or throttle network uses a four-wire cable. Cab bus connections between the throttle and the command station or throttle network use a 6P4C or 6P6C RJ connector, which can use four or six conductors in the cable. The 6P6C is specifically for the Power Cab.

NCE also employs a Control Bus to connect boosters to the command station.

The Cab Bus is polled network. Devices on the network do not speak until spoken to. The command station software controls the polling frequency and sequence. Cabs are not polled in numerical order. If a cab does not respond to a ping after several attempts, the command station will stop pinging that address. The command station will periodically ping all addresses, to discover new devices or acknowledge dormant throttles. It will ping addresses on a random basis to speed up operations when more than 30 cabs are on the bus. For faster response active cabs are polled more often than inactive cabs.

The Cab Bus connects up to 63 Hand-Held Cab Controllers to the Command Station. Data on the bus runs at 9600 bps, eight data bits, no parity, two stop bits and meets RS-485 specifications.

The limitations of the polled network are the number of devices (nodes) on the network, and speed. As more devices are added, their response time increases. At some point the electrical limits of the network will be reached, or a software-imposed limit. This determines the total number of nodes which can be connected to the network. Optimal polling cycles are determined by the hardware's speed and bandwidth.

The Cab Bus system is a polled system. Devices are continually in receive mode unless specifically addressed by the command station, at which time the command station relinquishes the bus to allow the device to respond. When throttles are polled, they respond by transmitting any change in status.

The bus should be a continuous daisy chain without "branches" of any significant length (longer than 8 feet). The RS-485 Specifications suggest data rates up to 10Mbits/sec are possible, or at lower speeds for distances up to 1200 m. As a rule, a 50 m cable should allow signalling rates up to 2Mbits/s. NCE suggests no longer than 300 m (1000ft) is acceptable, with branches not longer than 6 m.

The NCE Bus connections are as follows:

The Cab Bus can connect up to 63 Cabs to the command station.

Data on the bus is 8N2 (eight bits, no parity, 2 stop bits) following the RS-485 specification.

The cabs are in listen mode until they are specifically addressed by the command station (polled), at which time control of the bus is passed to the cab. All data sent from the cab is required to have bit 7 set to 1. A "ping" has bit 6 equalling 0, all other commands or data will have bit 6 set to 1

The cabs are continuously polled (pinged) for any change in status. When polled, the cab will reply with either a 2-byte response indicating a button press (first byte) then the second byte with speed information, or with a five-byte message indicating the device address (2 bytes), then the operation (2 bytes) followed by a one byte XOR checksum.

The cab will begin transmitting approximately 780 µS after receiving the last stop bit from the command station.

Cab addresses 0 and 1 are reserved. Cab 0 is the broadcast address of the command station. Cab 1 is reserved for future applications.

If a cab does not respond for several pings, it may be dropped from the queue for inactivity. Its address will then be pinged periodically until it responds to a ping.

Under normal circumstances, with 10 cabs in operation, a cab will be pinged about 23 times a second.

To poll all 63 addresses, the frequency per cab will be 3 to 4 pings/second, assuming 63 cabs in use and all are responding with a simple 2-byte response. Most NCE users will never experience this level of performance.

The command station polls the cab bus at regular intervals. In addition to the known addresses, it generates a random address during each polling sequence. This is done to discover any new devices which have been added to the Cab Bus.

Once an address is on the polling list, it stays there. During large or long operating sessions, restarting the system when time permits will clear the list of device addresses, removing any inactive devices and allowing the command station to create a new list with active devices. This is important if cabs are being added and removed from the cab bus during the session, as polling addresses which are inactive add unnecessary overhead and bus performance suffers.

Available Cab Addresses are related to the NCE DCC System in use.

When assigning cab addresses, leaving the range above 48 for Cab Bus devices prevents the possibility of conflicts.

Available Addresses on the Cab Bus 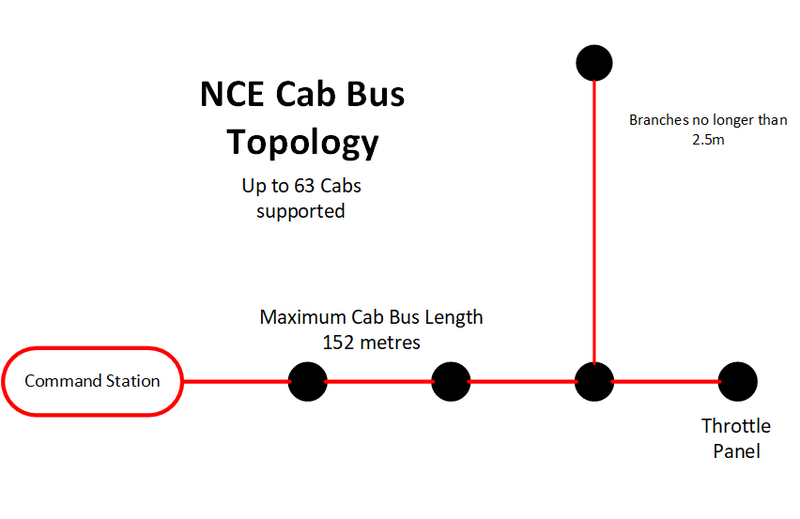 Proper wiring is important. While the CAB Bus may work, at some point in the future when additional devices are added bus problems will occur. Spending extra time and using a little more wire will avoid those problems in the future. The underlying electrical issues were always there, it only takes a few more devices on the bus to bring them to the surface.

As mentioned above, the maximum length of the Cab Bus is 500' in a continuous run (daisy chain), any branches off the bus should be no more than 8 feet long. The Cab Bus and its throttle panels should be arranged in a daisy chain fashion, one feeding the next. Attempting to save wire by using stubs off the main bus to feed throttle panels will result in issues. If stubs are needed, they must be very short, no longer than the length of a coiled throttle cable.

It is important to arrange and wire the Cab Bus in a linear fashion. NCE does not recommend splitting the Cab Bus nor the use of stubs. As this is a serial protocol, it is meant to go point to point. It cannot be wired as a star, nor should it form a closed loop.

NCE recommends the addition of a Cab Bus power source every 40 feet, dependant on the number of cabs installed/in use.

As more Cabs are added to the bus, more power will be required. Additional power supplies can be added, UTP panels have the facility to connect using a 3.5mm barrel plug. See the manual for the cab bus panel for additional details.

If the number of cabs in use overload the command station, the system can become unstable and possibly crash.

This is optional, and can be used when wired for compatibility with the Lenz XpressNet

This connection is used for the Cab Bus. The UTP (Utility Throttle Panel) has these connections.

Only the 4 inner wires are used. This is the preferred interface.

It is very important to get the correct type of cable. Using a cable which flips connections will damage your equipment.

This is used to connect between boosters and the command station. It uses a 4P4C RJ-H plug and socket, carries a low level DCC signal for the booster.

Boosters have two connections to allow pass-through to additional boosters.

Rapid flashing of the status light indicates the control bus isn't connected to the booster. It will do this when the programming track is active.

The UTP has four connections, and can be used as a three-way splitter to split the cab bus into three segments. See the NCE website for details. There is a newer version available which allows for the use of CAT5 cabling between UTPs.

Similar to the UTP, but only four connections, two for the cab bus and the remaining pair are for cabs.

The Digitrax UP5 is not compatible with the cab bus without modifications.

For additional examples, such as interfacing with Lenz or Digitrax boosters, see the NCE System Technical Manual.

The Power Cab comes with a custom RJ12 6P6C cable. Do not attempt to make your own. Replacements are available from NCE. Third party cables will not have the heavy gauge wiring needed to carry the track current.

The Cab Bus is a polled network, which is different from a CSMA/CD network such as Digitrax's LocoNet. As the network expands, throughput decreases as more devices have to be polled. With a polled network, the device must wait silently until addressed, whether or not it has a message to send. A CSMA/CD network does the opposite, a device sends a message without being asked for a message, and will keep sending the message until it determines that it was successful.

An unfortunate consequence of the CAB Bus's polling nature is the constant sending of messages to all the cabs on the bus. When used with wireless throttles, this generates a lot of radio traffic. Which is not a problem in a home or club setting.

It becomes an issue when in an exhibition environment with other layouts also using wireless throttles nearby. The volume of radio traffic the Cab Bus generates will swamp nearby receivers, as they are all on the same band.

Speed in bit/s multiplied by the length in metres should not exceed 108. Thus a 50-meter cable should not signal faster than 2 Mbit/s.

There are a number of useful articles on the Cab Bus on the NCE website:

Part 2 of General Discussion of the NCE DCC Cab Bus. Using Wall Warts with the Cab Bus and UPT panels with the Power Cab system.