Summary: Mixing DCC and Analog Control on the same layout is possible, with care taken to avoid connecting one system to the other.

If you're just starting out or thinking about converting an existing layout the first question you might ask is "Can I mix Digital Command Control and non–DCC (Analog) equipment?". Perhaps you have an existing analog (Direct Current) layout and find the prospect of adding multifunction decoders to all your locomotives a bit daunting. This article gives a quick heads up on what is possible when mixing systems.

The current opinion is that running a mixed analog/DCC layout is not recommended. It is still your decision.

As shown, operating analog locomotives on a DCC layout is not recommended. While possible and supported by some DCC systems (see Zero Stretching), some motors do not respond well, most will overheat if left sitting idle on the track, and some may even release the Magic Smoke. Coreless Motors can be destroyed by a DCC signal. Always refer to the instructions which came with the locomotive as some manufacturers will advise against using their product on DCC without installing a multi-function decoder.

If you really want to mix locomotives on a DCC layout make sure the analog ones are isolated when not in use. For example: Installing a switch to cut the DCC power to a storage siding).

A better solution for mixed operation is to only use analog power (i.e. your old controller) while you're in the process of upgrading to DCC. Most DCC multifunction decoders support analog power conversion to allow operation of a DCC locomotive on an analog layout. Even an older multifunction decoder that does not support analog mode or has it turned off in the CVs, will not experience any harm when left on an analog powered layout.

Warning: Do not connect an analog power source to the track unless the DCC Booster is disconnected! 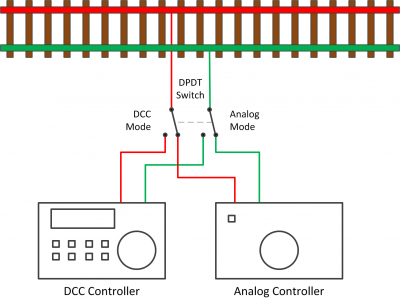 One route to transitioning from analog power to Digital Command Control is to setup your layout that can run in analog or DCC mode at the flick of a switch. If you have a modest layout with just one analog controller you can simply add a DPDT switch (Break before Make type) so that the power is either fed by the old controller or the new DCC controller. Just remember the warnings about analog locomotives sitting on live sections of track when in DCC mode.

This method achieves 100% separation between the control systems. Only one can be connected to the layout.

You might have noticed a column missing from the table, "Mixed Power" was omitted for clarity. This is where a layout is divided into different blocks where each block is powered by DCC or analog. This allows you to operate both types of locomotive but quickly gets complicated when you consider what happens when a locomotive crosses from one block to another.

This first issue is the same as before, if you run an analog locomotive on a DCC block you run the risk of overheating its motor. A DCC locomotive isn't such an issue (provided you match the throttle settings) since it will run on either type of power.

The bigger issue is what happens when the wheels on a locomotive or other piece of rolling stock with metal wheels short out the rail gaps between the blocks? In analog days this was not much of issue even if the throttle settings weren't completely matched, the analog controllers were pretty forgiving. However DCC power is nothing like analog power and the two will fight if shorted together. This could result in blown decoders, a damaged or destroyed booster, or blown analog controllers. 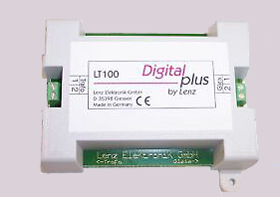 Lenz offered a solution, the LT100 Digital Circuit Breaker which is no longer in production. Since many modellers who upgraded to DCC completely abandoned analog operations in the process, the need for such a device was very limited. This device was popular in the early days of DCC, over time the balance shifted to DCC Only operation and the need for a device like this dwindled. Many layouts constructed today, almost 30 years after the introduction of NMRA Digital Command Control, are built for DCC operations exclusively.

When a locomotive crossed the gap separating a DC/Analog section from the DCC section, the LT100 immediately disconnected the analog power source.