Summary: Asymmetrical DCC is the term indicating an automation feature is available in somemultifunction decoders. 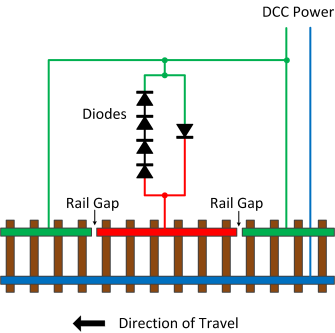 The Digital Command Control waveform is symmetrical, meaning the pulses on Rails A and B are equal in amplitude. For simplicity Rail A will be considered the positive portion of the waveform, and Rail B will be represented by the negative cycle.

Asymmetrical means "lacking symmetry", meaning that the amplitudes on Rail A and B are not the same.

To create the asymmetrical waveform, the DCC signal is fed through a special circuit consisting of four diodes in series, with another reverse biased diode connected in parallel. When current flows through a diode, a voltage drop of approximately 700mV occurs.

This results in the amplitude of the signal on Rail A being reduced by 2.8V.

Consider 16V as the track voltage. The amplitude of the signal on Rail A would be 16 − 2.8 = 13.2V. The amplitude on Rail B would be 16 − 0.7 or 15.8V. The amplitudes would no longer be symmetrical in nature. This is possible because you have four diodes with a 2.8V voltage drop, and another diode connected in reverse to complete the circuit when Rail B is high, allowing the current to pass through to the track and return to the booster.

The waveform shows the voltage between the two rails. The first part shows a normal waveform, then a waveform with positve asymmetry and then a waveform with negative symmetry. The different symmetries can be used to determine if the modified signal is from the left or right rail, or in more practical terms, assuming the asymmetric signal is always on the right rail from the driver's perspective, "which direction is the locomotive facing?"

A multifunction decoder with additional circuitry can measure the amplitude of the pulses on the rails, and compare them. This circuit will compare the two voltages, and if one is less than the other by a pre-determined amount, a signal will be generated and sent to the multifunction decoder's microcontroller. This will trigger the braking routine.

Asymmetrical DCC is not used on the entire layout. It is only used on short, isolated sections of track. The diode module often has a connection for a bypass switch, so the user can activate or deactivate this feature.

Multifunction Decoders which support these features are required.

This feature (if available) allows a fixed stopping distance regardless of vehicle speed. When activated, the locomotive will come to a stop, within the same distance. Pressing a Brake button or setting the speed to 0 trigger this feature. At slow speeds the result is prototypical. 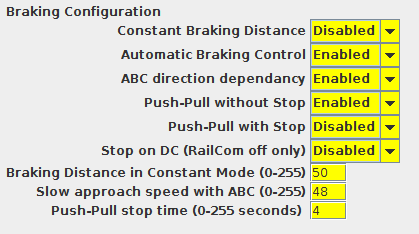 When the train enters the track section with the modified DCC waveform, the [[multifunction decoder]] senses the presence of the asymmetrical waveform and brings the train to a stop. Such as automatically stopping at the station platform. Or in the case of a terminal, before it runs out of track.

This feature could also be used in conjunction with a signalling system so the train does not enter a section when the signal is red, or stops before a diamond crossing without intervention. This would allow some automation where trains will not collide accidentally.

Another application is by wiring the module so it is controlled by switch points, allowing a train to enter a passing siding and stop if the switch is not set correctly, instead of fouling the points and derailing. Or the train cannot leave that track until the switch is correctly aligned. When everything is aligned correctly, the module will be bypassed and the train can move again.

Lenz offers multifunction decoders as well as the following modules:

The LG100 generates the control signals for a booster, just like the command station LZ100. The LG100 does not have an amplified output for connection to the track. For operation, a booster such as the LV100/LV102/LV103 or LV200 with is needed. Trains in both directions will stop.

As shown in the image at the beginning of the article, the diode module consists of five diodes.

One can construct their own modules using commonly available parts. The basic specifications are a diode with a PIV of at least 50V, and a current capacity of 3A or more. Any generic rectifier diode will do. An example would be a 1N5400 -1N5408 series diode, rated at VFWD = 1V, IFWD = 3A, PIV = 400V. This type of diode is available a low cost.

It is also acceptable to connect a toggle switch or relay across the diode module (in parallel) to allow the module to be bypassed if the automatic brake is not required at that time.

Remember: Multifunction Decoders which do not support Asymmetric DCC will simply ignore the altered DCC signal and continue on their way. If the track ends at the edge of the layout, a dead section would be a good idea, as well as some form of barrier.