Not to be confused with Automatic Brake Control.

Braking districts are segments of track where the train will stop upon entering. There are several ways to accomplish this:

There are many reasons why this is a useful feature. The most obvious is with swing or lift out sections on the layout. Rather than a duck-under, a bridge between two sections of the layout can be moved to allow easier access, such as to a door leading out of the layout room. Or to protect the approaches to a lift bridge.

Layout automation is another use, where trains will stop at signals or stations without operator intervention.

For obvious reasons you will not want a train to enter the section when the track is missing, since it will result in an expensive flight to the floor. By gapping the track and using one of the above methods, the DCC equipped locomotive should stop before it reaches the danger zone.

Consult sources on layout construction for more details on lift outs and their protection methods/wiring.

Implementation of a Brake District

There are several methods, from simple to complex.

If implementing a method that involves switching power sources, select a relay or switch with a Break Before Make configuration. This will avoid connecting something to the DCC power bus during the change-over.

In all cases an isolated section of track will be needed, with gaps to separate it from the adjacent track. The number of gaps needed depends on the level and type of automation.

Both Asymmetrical DCC and its cousin Automatic Brake Control (ABC) use external hardware to alter the DCC signal on the track. Decoders equipped to respond to the signal will act on the altered DCC signal.

See the page on Asymmetrical DCC and Automatic Brake Control for more details.

This is the simplest: A switch is used to disconnect an isolated segment of track from the DCC Power Bus.

A locomotive entering the segment will lose power and stop.

This method does present two disadvantages:

This method relies on disabling the Analog Conversion mode of the decoder. It is also the most problematic method as it is unpredictable, and every effort must be made to avoid damaging your booster. Consider using the method that employs "Set Speed to Zero" instead.

What is very important is that the DC source is never connected to the DCC source.

The relay is controlled by a detector. When activated, the detector changes the state of the relay and the DCC power is disconnected. In its place the DC source powers the track. The detector is not activated until the locomotive or entire consist is within the isolated braking district. This is important, as the DC and DCC voltages must never meet.

Read the decoder manual to see what features are available, and if Brake on DC is supported as well.

This is implemented using a booster supplying the brake district. 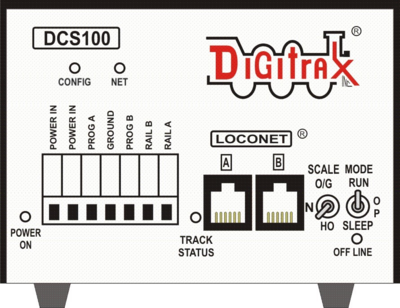 The program track outputs of the DCS100 are used to create a braking district.

This feature also works with the DCS240 and DCS210+

The Digitrax DCS 100 features two pairs of track connections: the normal Rail A and B, and an additional pair for the programming track.

A locomotive will, upon entering the brake section, act on the command. Most will decelerate to a gradual stop, using the momentum setting programmed into the decoder. Set correctly, the entire consist should coast nicely to a stop within the brake section.

To make this work, a DPDT switch is used to select between the normal DCC power bus as supplied by the Rail A and Rail B terminals, or the alternate DCC signal from the program outputs. When active, the train stops.

Changing the switch to connect the track to the power bus will cause the train to accelerate to its previous speed. Setting the throttle to zero when the train is stopped in the section is a good practice to avoid surprises.

The programming track outputs can be used to control several braking districts.

Digitrax DB series boosters can also be employed to create braking districts in combination with a command station.

The Zephyr series do not support braking districts.

This device is a brake signal generator, similar to the Digtrax DCS100 implementation. It is a simple command station which only generates a "speed to zero" command.

In actual use it requires a number of components to make everything work by connecting and disconnecting the master command station from the brake section booster.

The output is connected to a dedicated power booster. The BitSwitch Set Speed Zero Generator is addressable as an stationary decoder

The DSS1 LocoShuttle is a LocoNet device which can automate train movements. Manufactured by Sig-naTrak in the United Kingdom.

The LocoShuttle is a LocoNet device which behaves as a programmable throttle. Using occupancy detection, it can automate train movements.

By using DCC it is possible to allow the locomotive to obey signals. If the signal is 'stop' (red) as the locomotive enters the block it is automatically slowed and stopped until the signal indicates the 'caution' amber at which point it is allowed to proceed and sets the signal back to 'stop' red as it continues on its way. This is achieved by using the Brake on DC feature of NRMA DCC decoders.
Retrieved from "https://dccwiki.com/w/index.php?title=Braking_District&oldid=25598"
Categories:
Last Edited: 10 July 2021.