Summary: Automatic Brake Control (ABC) is a system to automatically apply the brakes to a locomotive when it enters a special section of track. This could be at a signal, at a terminus, at a junction or anywhere you want a train to stop automatically. The goal of Automatic Brake Control is similar to the Automatic Train Control (ATC) systems used on real railways to prevent trains passing a signal at danger.

Only mobile decoders which are Automatic Brake Control-ready and have the function enabled via the appropriate CVs will respond to to automatic brake control.

Some decoders support the "Stop on DC" feature. Most European brands, such as Lenz, ESU, Zimo and others support Asymmetric DCC for these features.

ENABLED means the bit is set to a value of 1 (or ON). DISABLED means Zero. 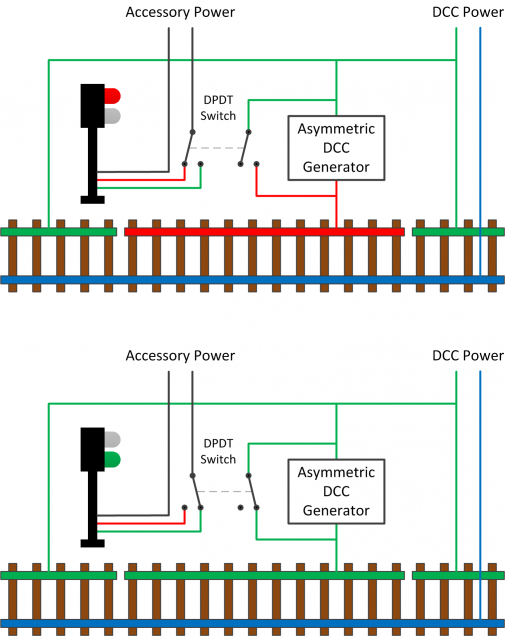 If the signal is a semaphore arm operated by a manual lever, a turnout motor (such as a Tortoise motor) or a servo, then the switch can be an SPST switch mechanically connected to the lever, the auxillary contacts of the turnout motor or a microswitch operated by the servo. In all cases, the switch contacts must be open when the signal is at danger.

Obviously, you could also simply use a completely independent switch to control the ABC section but that would defeat the purpose of it being an automatic system. You would have to remember to throw the switch whenever you change the signal.

Asymmetric DCC allows directional signalling because the decoder is able to differentiate between left and right (or positive and negative) asymmetry. With the locomotive facing in one direction, it will see asymmetry in one direction, with it facing the other direction it will see the opposite asymmetery. And this means physically picking up the locomotive and turning it around to face the other way (or turning around on the layout if you have a reversing loop or turntable), it does not mean just reversing the throttle direction.

A terminus station can be fitted with a permanent Automatic Brake Control section so that a train automatically comes to a halt when it enters the staion. No other special controls or overrides are needed because the default behaviour of an Automatic Brake Control-enabled decoder is to allow reversing back out of an ABC section. So to leave the station, all you have to do is reverse the direction of the throttle and the train will start back up and resume its original speed. 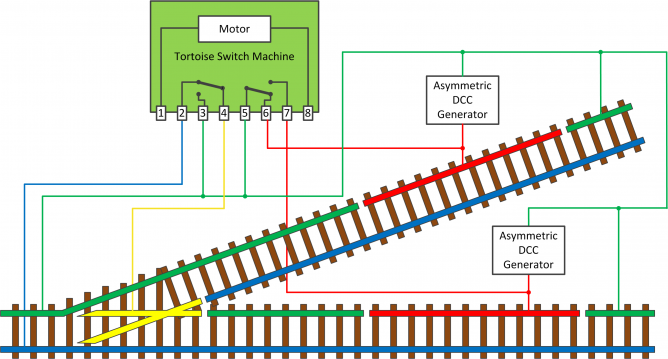 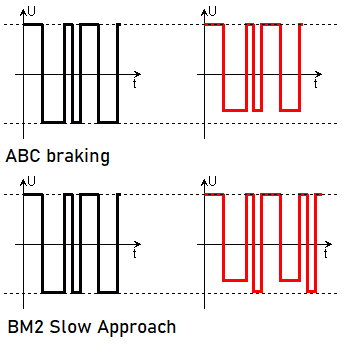