Summary: Bus termination is used with some DCC systems to reduce ringing and reflections which may cause problems on the Power Bus.

The theory: Reflections occur when the digital signal hits the end of the power bus, so additional precautions must be taken to minimize those reflections. It is similar in concept to terminations used on high speed computer data and address buses to prevent corruption of data and erratic operation. Some computer interfaces, such as SCSI, must be terminated by design. Ringing occurs during phase switches (inversions) by the booster's output driving an inductive load (the power bus).

Many have pointed to this as a solution to decoders becoming corrupted or erratic operations, when the truth may lie within poor wiring practices and dirty track. For a termination to be effective at eliminating an issue, it must be at the source of the problem, which is never at the end of the bus. In many cases the application of terminations is not necessary and does not solve the problem.

Modern, well designed multifunction decoders reject almost any combination of transmission-line ringing, RFI, and any other mismatch effects that may be caused by the layout's power bus. This decoder-oriented design solution is far superior to filters for unpredictable wiring arrangements. It is impossible to design a "one size fits all" solution to such an issue, as every layout has different wiring arrangements which alter the parameters. Any additional bus termination would require measuring every power bus on the layout and calculating a custom termination for each one.

Another contribution is the evolving design of boosters, where proper design can minimize issues with signal distortion as well as controlling any artifacts which may be caused by the power bus wiring.

Any Radio Frequency Interference (RFI) created by the electronics on the layout will be handled by the decoder and command station.

At the frequencies Digital Command Control employs, many of the arguments for termination just don't fit the parameters. Transmission Line Propagation at the frequencies used by Digital Command Control are manageable without any extra precautions such as terminators. Many layouts do not have the complex wiring configurations or very long bus runs which would be an issue. Most issues can be traced back to bad wiring practices. Claims of excessive voltage spikes may in fact be a result of poor wiring or other issues.

Before embarking on adding terminators, the track signals should be examined with an oscilloscope to determine if there is distortion, and wiring examined and corrected first. Adding terminators may introduce new issues into the equation, such are excessive waveform distortion.

Ringing is distortion of the DCC signal, where there is a spike at the leading edge of each pulse. It can result in a signal which is difficult to read, and in rare cases destroy a decoder. It causes are:

How to Construct a Terminator

A bus terminator is really an RC circuit. Which means Resistor Capacitor.

In this instance, a resistor is wired in series with a capacitor, and the combination is then connected across the bus wires. The time constant is selected to be small enough that it will allow the capacitor to charge and discharge rapidly, important when the phase of the rail changes.

Now for the math: 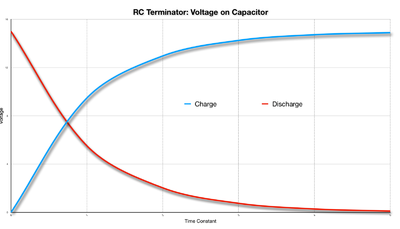 Charge and discharge cycle of an RC Circuit. 5τ is required for a full charge/discharge of the capacitor.

To work with signals in the Digital Command Control frequency range, the time constant Tau (τ) required is 1/100,000.

τ equals 0.000 01 seconds (10µS). To fully charge the capacitor 50µs is required (5 time constants). In this example the Cutoff Frequency (Fc) is 16kHz, so the RC circuit will not have a large effect on the DCC signal.

Substitution of values for the resistor and capacitor is possible, providing the resulting time constant is 5 to 10µs. You are not tied to any specific value. The recommended values from one manufacturer is a 100,000pF capacitor, 50V, with a series resistor value of 47 to 100Ω. This results in a time constant of 4.7 to 10µS. The 100Ω resistor is the preferred value. For scales such as HO and N, a half watt resistor is the minimum. For larger scales, such as O and S, at least 1W is the minimum. Large scales, such as those used for garden railways, for example, should use 2W resistors. The capacitor should be at least 50WVDC, non-polarised.

It is also permissible to use two capacitors in parallel to increase the total capacitance of the RC circuit, if a non-standard value is needed.

The terminator helps counteract the impedance of the power bus. It also filters frequencies above that of the DCC signal on the bus, reducing distortion. Should spikes occur, it offers a low impedance path back to the booster, instead of allowing them be be reflected and further distort the signal. The terminator also reduces distortion of the waveform by minimizing reflections caused by the open end of the bus.

Most signal quality issues are related to excessive bus impedance, specifically its inductance. Poor wiring, either through the selection of the incorrect wire gauge or poor workmanship, have direct inputs on the impedance of the bus.

For more information on wiring, see the Wiring for Digital Command Control pages. Also read Wire Sizes and Spacing, and the section regarding twisitng bus wires.

The design of the booster's output stage is very important. Much like an audio amplifier, the goal is to provide a clean output while maintaining the fidelity of the input. Careful design helps to control ringing and overshoot in the DCC waveform. Compromises will be made, with some designers favouring one approach over another. As time goes on, improved components and updated booster designs result in better, higher fidelity track signals.

When the booster output is driven hard, and increase in ringing will be seen. When under a light load, ringing will increase, and the location of the load will also have an impact. The addition of the RC filter on the bus will change this behaviour and reduce ringing. Common practice is to install the termination on the end of the bus.

Who Needs to Terminate Their Bus Lines

The bus forms a transmission line. At DCC frequencies there are no real issues to be dealt with. The need for a terminator is directly related to the design and implementation of the output (driving) stage of your booster. Some designs already incorporate an RC snubber within the booster to deal with impedance issues related to the inductance of the load being driven. The output impedance of the booster is also a consideration.

This is an issue related to long bus runs. Most layouts will not have any problems with the bus wiring which would require installation of bus terminators. Should you experience erratic operation, this would be one possible option. Some manufacturers recommend terminating the bus. Others do not recommend the addition of terminators.

Examining and correcting any deficiencies in the bus wiring is the first step in addressing issues related to signal distortion.