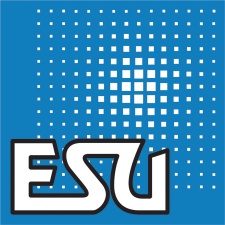 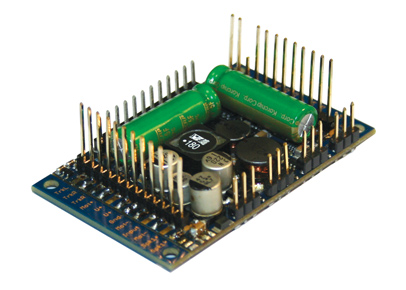 An example of a locomotive decoder (LokPilot) 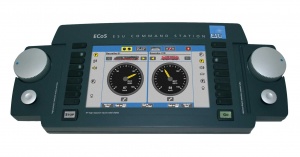 Electronic Solutions Ulm (known as ESU) is a German manufacturer of accessories for model trains, especially known for their locomotive decoders.

The products include the LokPilot and LokSound series of decoders and recently the Märklin company has teamed up with ESU for the manufacture of the decoders for their new generation of mfx locomotive decoders. ESU is also an OEM supplier of decoders for a number of manufacturers.

ESU was one of the first manufacturers to produce decoders capable of sound - a feature that has become very popular with model railroaders. Their LokSound v3 decoders have the added benefit that end-users can re-program the sound files used by the decoder, using a LokProgrammer.

Some of their decoders such as the LokPilot and LokSound are multiprotocol in that they support the Motorola format as well as Digital Command Control (DCC) and also Märklin style analog AC current. Their LokPilotDCC on the other hand is a pure DCC decoder and will not work in a pure Märklin/Motorola environment. The ECoS DCC system supports NMRA DCC, Marklin/Motorola format and Selectrix modes.

ECoS is a combined command station/throttle which features a number of innovations, such as the graphical display with a large colour LCD. This system is mainly focussed on the European market.

The ESU mfx format was designed by Marklin, but information is hard to come by. They describe it as a bi-phase format.

It looks a lot like DCC with a zero pulse being 100 milliSeconds in duration, and a logical one represented by a 50 mS pulse. Polarity is not an issue.

ESU is a supplier of both retail and OEM Decoders. Unlike many other decoder suppliers, ESU doesn't supply different versions of OEM and retail decoders. The decoders are identical. For the Australian and North American markets, the Select OEM decoder is used and identical to the retail decoders. The user can replace the sound files (as long as they are Select sound files.)

LokSound decoders are supplied without any software. The manufacturer or retailer can load software for a specific application. They can also set the defaults for that decoder's application.

A notable user of LokSound decoders with custom sound files is Rapido Trains.

Drive Hold allows you to lock the speed and control the prime mover sound with the throttle.

Run 8: Lock the prime mover in notch 8 and control the speed with the throttle.

Coast: The prime mover is set to idle, but speed is still controlled via the throttle.

LokProgrammer version 5.0.0 was released in January 2019. See the ESU website for downloads and updated software.

This is ESU's line of DCC Equipped Locomotives in H0, as well as rolling stock.

The following manufacturers use ESU LokSound Decoders in their DCC equipped locomotives. (January 2017)