Summary: Some multifunction decoders support an additional external energy storage module to provide backup power when the electrical supply from the rails is interrupted by dirt, bad contact, insulated frogs, etc. This may prevent a locomotive from stalling when travelling over dirty track or turnouts with large plastic frogs, especially at low speed. Short wheelbase locomotives such as 0-6-0 steam locomotives are more susceptible due to their inherently limited number of electrical pickup wheels. Locomotives without flywheels can also benefit from energy storage. Sound Decoders benefit from energy storage systems by preventing dirt and bad rail pickup from causing audible crackling or static coming from the loudpeaker.

A decoder with an energy storage capacitor attached

Typically, this function cannot be integrated into a decoder because storing a useful amount of energy requires a sizeable capacitor. The capacitor (and additional components) must be installed in a separate location in the locomotive and connected to the decoder via a couple of wires.

The Lenz USP system is different. While it does have a small energy storage circuit on-board, the USP decoder has an advanced signal processing system that can read a weak or distorted DCC signal, thus keeping the decoder under control of the DCC system. With the Energy Storage concept, the train keeps moving if the DCC signal is lost, and control will only be regained when the decoder again sees a valid DCC signal.

An energy storage module works by charging a large capacitor while the Digital Command Control signal from the rails is available. Capacitors store voltage, and attempt to resist changes in voltage by charging and discharging.

When the DCC signal on the track is interrupted, the capacitor begins to discharge which provides decoder power, which in turn supplies the motor. It can only do this for a short period since the capacitor will rapidly discharge. At some point the discharge will cause the voltage across the capacitor to drop below the minimum required for decoder operation.

The capacitor is charged from decoder's internal DC supply. Capacitors can be fitted if access to the decoder's power rails is available. During operation it will discharge into the decoder via those power rails.

Some additional components are required if a large capacitor is used.

Firstly, a large capacitor has a very low resistance when discharged. Placing a locomotive onto a layout with such a capacitor might trigger the command station or booster's short circuit detection. To prevent this a current limiting resistor is needed to control the inrush current. This however causes its own problem in that it limits how much current the decoder can draw from the capacitor. A diode can be added to overcome this limitation.

Secondly, a large capacitor can hold energy for quite a period of time (many minutes) if there is little current draw. A locomotive that was removed from the track and then returned later can remember what it was doing before and set off on its own. While it's away from the track, the voltage of the capacitor may drop to the point where there is insufficient power to turn the motor but enough to retain the decoder's memory that it was moving. To prevent this a discharge resistor can be added across the capacitor's terminals to slowly discharge it when not in use. This effectively resets the decoder so that its speed is zero.

One problem many modellers encounter is unexplained "short circuit" conditions when track power is applied. It is believed to be a short circuit because the booster reacts immediately to the inrush current, activating its overprotection circuits to protect itself from damage. Most boosters do not react to a fixed amount of current, they react to the rate of change. This allows them to react quickly to a sudden spike in amperage flowing into the layout.

This phenomenon is caused by the inrush currents demanded by the capacitors. To the booster, they appear as a short circuit when the sudden surge of current begins charging the capacitors. The current will decrease rapidly, but the initial surge is fast enough to activate the over-current protection in the booster.

Energy storage modules can cause problems on the programming track. The capacitors will absorb the small currents used for programming, resulting in the inability to program the decoder, or erratic results. Some decoders, such as ESU's, have the ability to disconnect their Power Pack® module during programming.

See the section on Programming Issues for more information.

Double-layer capacitors (often referred to as gold capacitors) offer much denser energy storage than conventional capacitors but at a higher price and limited voltage rating. Usually at least four double-layer capacitor "coin cells" must be combined for this application. The benefit is the storage capacity can be 10 to 100 times more than with electrolytic capacitors of the same physical size. Despite the name, "gold capacitors" contain little, if any, gold.

Regardless of the type, all of these capacitors are polarized, meaning that they must be wired the correct way round.

For HO or OO gauge a capacitor as small as 470μF will provide some benefit but sizes of 2200μF and above are preferred. 2200μF will be able to supply power to a locomotive for a few tenths of second, enough to get it over a piece of dirty track at low speed. The endurance of larger capacitors of over 10,000μF can be measured in seconds.

Many locomotives will have insufficient or oddly-shaped space available to install a large capacitor but it is possible to use multiple smaller capacitors instead. They can be wired in parallel to increase the energy storage capacity or wired in series to increase the voltage rating. A combination of series and parallel wiring is also permitted.

Series and Parallel as Applied to Capacitor Circuits

Capacitors behave the exact opposite to resistors in these circuits.

The voltage rating is equal to the lowest rated capacitor in the group. 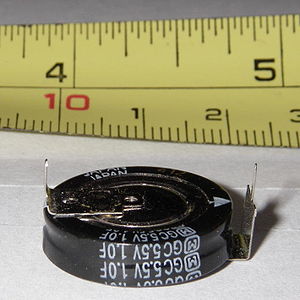 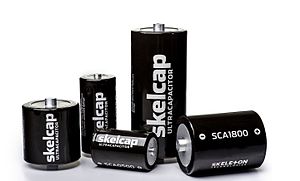 There is no NMRA standard for wiring energy storage modules to multifunction decoders, and there are no known standard wiring harnesses or connectors that include the necessary connections. On many decoders the user must solder additional wires directly to circuit board, often requiring removal of some of the insulating plastic sleeve. More proficient soldering skills are needed to perform this task than are typical for installing a multifunction decoder.

The Lenz system uses 3 wires for U+ (blue), charge (pink) and ground (brown).

Be sure to throughly read and understand the instructions provided by the manufacturer.

The energy storage module is fitted between the blue common lead and the 0 or ground lead. Many decoders will not have a pad marked Negative or Ground. To complete the circuit the module must be connected across the diode matrix that provides power to the decoder. This can be done by soldering to the cathode of one of the diodes in the matrix. This must be done on the decoder side, not the track side of the matrix. Be aware that one of the diodes in the matrix is the signal pick off for the decoder. That is not one to be used.

ESU has stated that they will not warranty LokSound decoders damaged by poor or improper soldering techniques. They strongly advise you to consider carefully the need for adding capacitors.

The LokSound 5 Manuals contain information and wiring diagrams on page 42.

For proper operation, disable the Analog Conversion mode (in CV29), and set the packet timeout value in CV11 to "0."

As always, consult the literature that came with the module for any CV changes required.

Energy storage is not typically supported in Analog Conversion mode because there is no way for the decoder to distinguish between a command to stop (0V sent by an analog throttle) and a dirty section of track (0V received by the decoder). A decoder fitted with energy storage and with analog conversion enabled will still work normally, it will simply stop immediately when it receives no power.

Theoretically, it could be supported with the decoder assuming 0V means coast for a short period and then stop. The disadvantage being that there would be no way to cause an emergency stop.

There can be unintended issues arising from the use of a "keep alive" module. In many cases the programming track output will only have power available during a programming read/write cycle.

The simplest way around this problem is to mechanically disconnect the capacitor from the decoder prior to programming. If the capacitor is soldered to the decoder, disconnecting is not an easy task. During installation a switch can also be installed which can break the connection to the capacitor. Mounting the switch in an easily accessible location may not be possible.

As inductors are not polarity sensitive, it can be easily fitted to either wire feeding the capacitor.

Some decoders have the ability to disconnect their energy storage modules when they go into their programming mode.

The ESU LokSound 5 decoders have the ability to disconnect the ESU Power Pack® when a programming command is received.

For ESU Power Packs, disable the Power Pack on Aux 6 or Aux 7:

Re-enable the Power Pack once programming is complete:

This process uses an Indexed CV. Some DCC systems may experience issues when attempting to program decoders with Indexed CVs.

Do not construct your own energy storage module for use with ESU LokSound decoders. Using any modules other than the ESU Power Pack with a LokSound decoder can result in destruction of the decoder.

DCCconcepts refer to energy storage as "Stay Alive", they supply some decoders with the storage module included in the package or they can supply them separately. All of their current decoders support Stay Alive and all of them come pre-wired with two additonal wires to make it simple to attach their module without having to solder directly onto the decoder's circuit board.

TCS makes energy storage modules and decoders with integrated on-board storage. All of their decoders manufactured after February 2012 are Keep-AliveTM ready or have it on-board. Some of their decoders require soldering wires together to connect the storage module (-KA series) or simply plugging them together with a quick connector (-KAC series). They also supply versions with a harness for their WOWSound multifunction sound decoder

Most Zimo decoders support energy storage using their SPEIKOMP kit and they supply instructions for building completely DIY modules allowing greater flexibily for capacity and physical size. Some of their decoders have the built-in support circuitry and only require the capacitor itself to be added whereas others require additional external components.

Video: Demonstration of a Keep-Alive by TCS

Installing a TCS Keep-Alive with a LokSound Select decoder

Connecting a CurrentKeeper to SoundTraxx Decoders