Summary: The PECO Insulfrog turnout is DCC Ready right out of the package. Much has been written about the Insulfrog and DCC, yet a simple additional step during installation will solve all the problems.

They have several types of turnouts:

The PECO Insulfrog is a power routing turnout. The term Power Routing indicates that only the route selected by the switch rails has power. This is accomplished by controlling power to the point rails. Out of the package it is 100% DCC Compatible. For existing installations, modifications may be needed to eliminate a source of problems associated with the design of the frog.

Thanks to Railway Bob for the information and permission to use it.

If you have problems with a particular vehicle equipped with metal wheels causing shorts when travelling through an Insulfrog or Unifrog turnout, you should begin by checking the wheel gauge and turnout clearances using an NMRA gauge appropriate for your scale. One culprit is the lack of a 3º taper on the wheel's tread.

The PECO Insulfrog is DCC Ready right out of the box!

As you can see in the images below, the Insulfrog is considered "DCC Ready" as the switch/closure rails are electrically connected to the stock rail nearest to them. Unlike the Electrofrogs the Insulfrog controls the flow of electricity to the routes that come out of the turnout (Power Routing), energizing the appropriate point rail.

With DCC there is a potential shorting problem as metal wheels go through the frog. This only occurs if the wheel lacks the 3º taper recommended by the NMRA. Wheels manufactured for the European market do not seem to have this problem.

This occurs particularly with the PECO Medium and Large Radius Turnouts. On analog/direct current layouts, the Insulfrog was often used for its power routing abilities to isolate a siding. In DCC practice, all track is energized all the time from the power bus. This is where the shorting issue comes in. The momentary short can trip the booster or restart the decoder.

Insulated rail joiners on the point rails solve the common issues found with DCC and Insulfrogs. They eliminate potential shorts at the heel of the frog and between the stock and switch rail. When converting existing trackwork to DCC, follow the instructions presented here to identify and correct any issues which arise.

The usual source of frustration with turnouts and DCC is when the switch rails are electrically bonded together and a metal wheel bridges the gap between the open switch rail and the stock rail. The Insulfrog's switch rails are independent of each other, with the electrical connections made by a tab, as seen in the picture above. 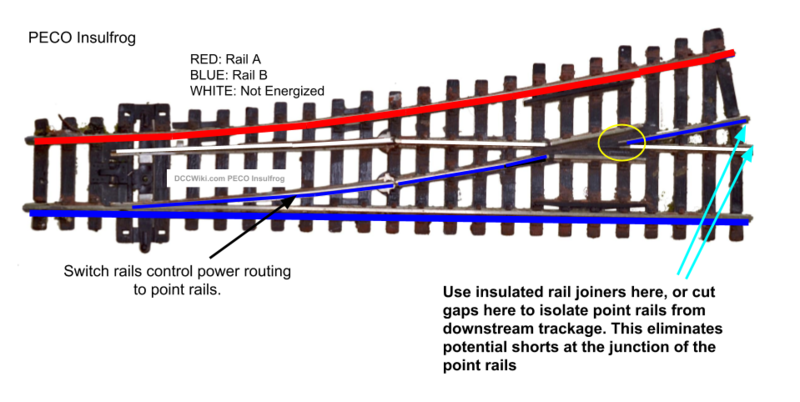 As shown in the pictures, the point rails are powered using small wires which bond the appropriate point and closure rails together.

Insulated rail joiners on the point rails eliminate the possibility of a short between the stock and switch rails, as they would be back fed from the point rails.

Often caused by an improper wheel profile, such as flat wheels and blind drivers. NMRA RP-25 wheels have a 3° taper on the tread face from the fillet radius, which aids in tracking. Unfortunately the 3˚ taper is not mandatory. Wheels made to the NEM (European) standards have this taper.

The power routing capacity of the Insulfrog was useful in analog operations, but it causes problems in DCC since the turnout no longer needs to control power routing.

If a gap is cut, insert an insulating material, such as styrene, to fill the gap and prevent a problem should the gap close due to movement of the benchwork and/or rail expansion caused by humidity and temperature changes.

Only one point rail is energized, and that is controlled by its associated switch rail.

With some boosters it is possible to slow the reaction time when a short is detected. By increasing the timeout value nuisance trips can be reduced, such as those caused by the wheel tread bridging the point rails. See the instruction manual for your booster for details.