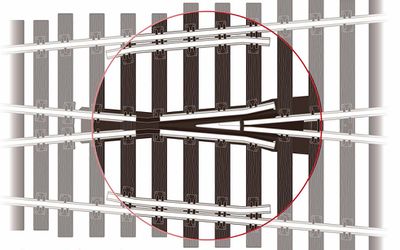 Summary: The PECO UNIFROG is a new turnout design from PECO. Out of the package it will behave like the PECO Insulfrog turnout. PECO plans to replace their Electrofrog and Insulfrog products with the new Unifrog over time. Doing this allows PECO to eliminate two products and replace them with one. As of 2020 only a limited selection of Unifrog turnouts are available, but this is expected to expand with time.

There is additional information regarding turnouts in general on the Turnout page.

The wiring of these new turnouts is a development of both the Insulfrog and Electrofrog designs.
For current users of the Electrofrog or Insulfrog versions of our turnouts the new Unifrog gives modellers the best of both worlds. As supplied, the turnout is wired completely “live”, except for the frog tip and wing rails, and can be used straight out of the packet without any further modification (and so behaves like an Insulfrog).
The stock rails are wired to the closure rails at the factory, which in turn are connected to the corresponding point rail. This means the turnout is completely live (except for the tip of the frog), no extra wiring required. If the turnout is being used as a switch to isolate a section of track then it is simple job to remove the wire that joins the closure rail and stock rail and it will work like a current Insulfrog. Peco provides a pair of pigtails to allow wiring the turnout to behave like an Electrofrog. (They have been spot welded onto the appropriate places.)
To change frog polarity the PL-13 or PL-15 change-over switch/microswitch, or the SmartSwitch SmartFrog PLS-130 with do the task. A Frog Juicer or a mechanical switch would also work.

With Electrofrog and Insulfrog, modellers were able to make good looking functional trackwork. The decision of Electro or Insulfrog had to be made at the time of purchase. After purchase, how you wire the Unifrog is up to you.

For ease of identification, the PECO part number has a U indicating Unifrog in the part number on the packaging. Example: ST-U750 is a Unifrog RH turnout, O Scale.

As shown in the picture above, the Unifrog has a metal frog, like the Electrofrog. The difference is that the Unifrog is constructed with gaps filled with plastic at the toe and heel, to isolate it from the rest of the turnout. Out of the package it will operate as a Insulfrog, except it is not power routing. Closer examination reveals the toe and heel of the frog are isolated from the track, so it will be dead when installed. There is a wire welded to the underside of the frog connecting the wing and point rails, allowing it to be powered using a microswitch or another device. This will allow the phase of the frog to be controlled with relation to the switch points, like the Electrofrog. As the frog is completely isolated from the trackwork, no additional gaps or insulated rail joiners will be required on the point rails. Gaps have already been incorporated into the design of the Unifrog.

If you flip the Unifrog over, you will see that there are wires connecting the closure rails to the appropriate stock rail, eliminating the potential of a short should a wheel bridge the gap between the switch and stock rails. Perfect for DCC operations. This also eliminates a failure point, as a mechanical connection using the switch rails isn't needed for power, like the Insulfrog.

Advantages of the Unifrog Design

Disadvantages of the Unifrog Design

Possible mechanical short at the point rails if NMRA RP-25 wheels lack the recommended 3˚ taper. Wheel sets meeting the NEM standard do not exhibit this issue.

What is the Difference between Unifrog and Previous PECO Turnouts?

The revolutionary aspect of the Unifrog is that you can change your mind. Install them in them as they come (a dead frog as in the Insulfrog), then later decide to convert to a live frog (Electrofrog). With the Unifrog this can be done without having to buy new turnouts. In fact, you do not even have to lift the track to re-wire the turnout, providing a hole was drilled into the benchwork for the frog wire to pass through.

Currently the PECO Unifrog turnouts are limited in selection. PECO has released an N Scale medium radius SL-U395F and SL-U396F turnouts, and for H0 the SL-U7061 and SL-U7062 #6 turnouts. For 00, they have released Bullhead rail products in the form of a Double Slip, Single Slip and Long Crossing. Also available is the SL-U8363 OO/H0 #6 Double Slip. The SL-U1188/1189 Large Radius C75 turnouts are also available. As tooling is replaced, more Unifrog turnouts will come on the market.

PECO plans for the following will be available during 2020, as shown in the table. There is also the possibility of a #8 in Code 70. PECO will also be reengineering their C83 #8 turnouts to the Unifrog format. Code 70 and North American C83 will also appear as they use the same track base dimensions. The global COVID-19 pandemic has interrupted most of these plans.

PECO has indicated the Code 70 #8 turnouts are almost ready for production.

PECO is planning to introduce the Code 70 #6 SL-U7061 & SL-U7062 turnouts in the summer of 2021, after the back orders for other Unifrog product has been filled. PECO has stated that demand in 2021 for their track product line is at an all time high.

PECO has announced that Streamline Code 70 #6 and possibly #8 turnouts, will be available soon.

Bullhead turnouts in medium radius. PECO is also asking its customer base what they would like to see in the Streamline Bullhead series

There are two options

The PECO Unifrog is not power routing.

From the factory, the point and closure rails are wired accordingly for proper operation. The switch rails are also powered, eliminating the need for a mechanical connection to power them. The closure rail is also wired to the adjacent stock rail. The frog is isolated from the closure and point rails. Therefore, insulated rail joiners are not required on the point rails.

Anyone who has purchased a Unifrog can take photographs to illustrate this article. It would be appreciated.