Summary: A crossover allows a train to move from one track to another. A Slip Switch introduces new variations. 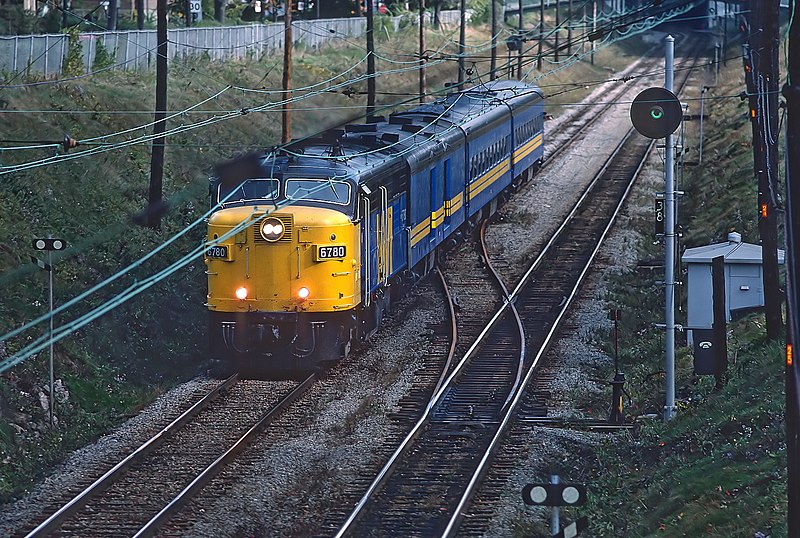 A crossover allows a train to move from one track to another, as opposed to a crossing which allows one track to cross another.

Many crossovers are a simple arrangement of turnouts which provide a path from one track to another. Another variation is the Scissor or Double Crossover where two opposing crossovers overlap each other. This compact arrangement allows trains to cross between two parallel tracks in either direction.

Variations are Single-Slip and Double-Slip crossings that allow the train to pass from one track to the other. The single-slip version only allows this "slip" on one side whereas the double-slip allows it on both. Slips are a lot more complicated because the are effectively a crossing and two turnouts all combined into one.

In general, any crossing that works with analog power will work with DCC. However, there are a couple of issues peculiar to crossings that relate to DCC. The first is to do with locomotive pickups and the second is live frog switching.

What is the Difference between Single and Double Slip?

The difference between the two is rather simple.

While popular on model railroads, the prototype has been removing them for years, as they require a lot of maintenance. They were popular in tight quarters, such as a station with multiple platforms receiving multiple trains in short periods of time. It allowed for multiple routes in a compact space, compared to using turnouts and crossovers.

Single-slips appear to have 2 useful settings; both sets of switches "closed" (behaves just like a crossing) or both switches "thrown" (slip route is selected). As the diagram shows, Route A has two routes available to it, where Route B has only the crossover route. However, as we shall see below, the other settings can be useful too.

Double-slips have 4 useful settings: Slip one side, slip the other side, cross one way or cross the other way.

These settings are shown in the table. Since double-slips are completely symmetrical, "thrown" and "closed" don't have much meaning but the table is written so as to be consistent with the single-slip version.

A scissor type crossover is equivalent to 4 turnouts and a diamond crossing. There are some ready-made ones available such as the PECO N gauge SL-E383F. The scissor crossing allows a train from either direction to change tracks. This arrangement is much more compact than using a double crossovers for the same purpose.

Sometimes known as a Double Crossover but that can also refer to two non-overlapping crossovers, one after the other. See Wiring Crossovers for more details and a video

A dead frog crossing has its from made of plastic or if made of metal, it is isolated from the switch and has gaps on its point rails.

Dead frogs are more of a problem with crossings than they are with turnouts, instead of just one dead section there are four dead sections. This greatly increases the chances that a short wheelbase locomotive or one without many pickups will stall on the crossing.

The diagram below shows an 0-6-0 locomotive passing over a crossing where only 2 out of the 6 wheels are live. If either one of those two wheels doesn't have a pickup then the locomotive is dead. The other route is shown unpowered for clarity.

There are two approaches to solving this:

A live frog crossing has conductive metal frogs to reduce the dead sections where there is no electrical pickup.

Live frogs present a similar problem as they do for turnouts; the phase must be correct for the route in use. With crossings there are two additional issues:

There are many solutions for these problems and they are discussed in Wiring Crossings.

Note that some live frog crossings do not have the insulating joint where the stock rails meet, therefore both routes must be in the same power district unless you gap or isolate the stock rails. Doing this eliminates phase issues between two districts.

Slips are the slightly more straightforward case because the turnout motor that controls the switch rails can also be used to switch the frogs. The key thing to remember is that each frog should be fed from the opposite turnout motor accessory switch.

Single slips have one case (both sets of switches closed, not thrown) that causes a bit of a problem. In this case both routes are available and each route will have one frog phase wrong if the simple wiring described above is used. There are a couple of solutions to this:

Dead frog slips can be wired up essentially the same as dead frog diamond crossings except that all routes should be in the same power district.

If a reversing loop is involved (one end of the crossing loops back around on itself) then a DCC Auto Reverser will be required for the loop and insulating rail joiners or gapped rails must be used.

Live frog slips can be wired up in a similar manner to live frog crossings as follows:

Scissor crossings can definitely use this method whereas diamond crossings can only use it if there is a related turnout that can be used to infer the selected route. For example, if the crossing is due to a junction on a double track main line and the turnout is set to the diverging route then the only safe route through the crossing is the diverging route. The main line that it crosses should be signalled to reflect this.

The diagram below shows an example junction where the down line to branch has to cross the up line. The crossing's frog polarities are set by the down line turnout. Note that this junction is simplified for clarity, in reality there would either be another turnout on the up line for trains returning from the branch line or the crossing would be a single-slip.

Generally, ordinary crossings (not slips) route power through the straight routes using factory installed bonding wires on the underside. There is no electrical connection between the two routes. This allows the two routes to be in separate DCC power districts. Also it doesn't matter if a reversing loop is involved (imagine the crossing at the center of a figure of eight), there will be no short circuit.

The diagram shows a Peco Insulfrog type crossing with the rails in 4 colours to represent the different phases and potentially different power districts.

Live frog crossings and slips are different, there will be an electrical connection between the two routes and therefore they should probably both be in the same DCC power district. See Wiring Crossings for more information.

On a DCC layout, crossings can be operated remotely using Turnout Motors controlled by Stationary Decoders using commands sent from a Throttle. You need a minimum of 2 turnout motors for a crossing and some may need 4. This additional complexity is a good reason to consider automatic routing where setting a route will automatically throw all the turnout motors required to complete that route.

This section will assume that the mechanical method of controlling frog phasing uses one or two SPDT switches attached to or integrated into the turnout motor. There are other methods (such as manual throws with built-in switches) but these are effectively the same for the purposes of this discussion.

This solution has to be divided into two categories; slips (which have switch rails) and diamond crossings or scissor crossings (which don't).

This image was used with the kind permission of Fast Tracks.

An insight into Single and Double slips

Wiring a Double Crossover for DCC

The double crossover is a cool piece of track, but due to its complexity, some model railroaders may shy away from using it.