Summary: A Power District is the preferred Digital Command Control term for what was, and is often called, a Block. In prototype railroad operations, a block is a section of track, usually controlled by signals, where only one train should be in operation. Block is a legacy term from the days of analog operation of model railroads.

An analog (Direct Current) controlled model railroad employs electrical blocks, which are sections of track that can be powered independently. This allows trains to operate independent each other by connecting separate throttles to individual blocks via a selector switch.

Digital Command Control doesn’t need blocks, as trains can run independently on a single “block”, with the whole railroad potentially being one block.

In DCC the term block is not used. The equivalent term is Power District.

With DCC, power districts are only needed when you want to split up the track for the following reasons:

Power Districts are not needed to control the actual trains. That is handled by the decoder inside the locomotive.

It is important to gap both rails, and fill the gap using an insulated rail joiner or other material when creating a power district. Filling the gap is important to prevent one district from connecting to another should the rails move with the benchwork due to humidity changes.

There are two levels of districts. The highest level is the Booster District. The level below it is the Power District

What is a Power District?

Should a short circuit occur within a power district, the power management device will disconnect that district from the booster. This prevents shutdown of the entire layout in circumstances like this. The rest of the trains keep moving as if nothing happened, and the cause of the short within the district can be remedied without impacting operation elsewhere.

What is a Booster District?

A Booster District is Power District powered directly by a dedicated booster. The terminology indicates multiple boosters are involved. Another booster will provide power for the rest of the layout.

Example of a Booster District

A yard, with a dedicated booster supplying the yard trackage exclusively. There may be an engine service area within the yard where motive power is sitting idle, as well as locomotives being hostled onto the ready track, awaiting their crew and a train assignment. The entire yard, with both switchers and road locomotives, may demand a significant amount of power.

By assigning a booster to supply that power, the rest of the layout will have more power available to it from another dedicated booster. A single 5A booster may not be able to supply the demands of mainline and branchline operations in addition to a busy yard and engine terminal.

Giving the yard its own dedicated booster reduces the burden on the entire layout. It also isolates the yard from the layout, eliminating interruptions created by derailments or incorrectly aligned switches in the yard.

In Analog (Direct Current) model railroads, a block is a defined as an electrically isolated section of track. This allowed each section of track to be electrically and mechanically separated from the others, with power to run a single train from the throttle controlling that block. This method resulted in fairly complex electrical switching when a train moves from one block to another. The operator or dispatcher would flip switches to route power from the selected throttle to the blocks the train needed to travel across. Ideally the switches would only allow one throttle to be connected to a given block at any time.

Wiring complexity is determined by how many blocks and throttles are in use, and the setup for operations. A central dispatcher may control the power routing on a large layout or in a club setting, or throttle selection could be more local to the operator. In any scenario, it means a lot of wire, many switches, and significant investments in time and money. Digital Command Control eliminates the need for complex wiring to control train movement.

Electrically isolated power districts are created by gaps in the track. Both rails could be gapped, or just one (common rail wiring). These allow a section of track to be electrically isolated from the rest of the layout. Gaps can be made using insulated rail joiners, or by cutting a gap using a razor saw. If the gap is cut, inserting a piece of plastic between the rail ends prevents the creation of an accidental connection should the benchwork move with humidity changes and close the gap.

A separate power bus will supply each district from a power management device.

The best way to determine where to locate a power district is by examining the traffic and power requirements needed for each operational section of the layout. A busy yard may have several switchers in motion, multiple locomotives on the standby tracks, a locomotive servicing area, and trains arriving and departing regularly. There may even be a local freight or two serving nearby industries.

A long stretch of mainline may only have one or two trains on it, with a few sidings and branch lines. There probably will not be a lot of traffic demanding power, but consideration should be given based on track density. A double track mainline may see a lot more traffic, thus it would require more power to operate effectively.

By subdividing the track into power districts, a power hungry zone such as a busy yard can be divided into one or more power districts. Having the yard as its own district will eliminate annoying shutdowns cause by short circuits, which are inevitable where a lot of switches are found. A short in the yard would be isolated from the rest of the layout, allowing operations to continue unimpeded.

Should the need arise, a power district that demands a lot of current can be powered by a dedicated booster later to support the traffic in that district. Typically a 5A booster can support up to 10 operators on a layout, depending on the amount of motive power on their consists. 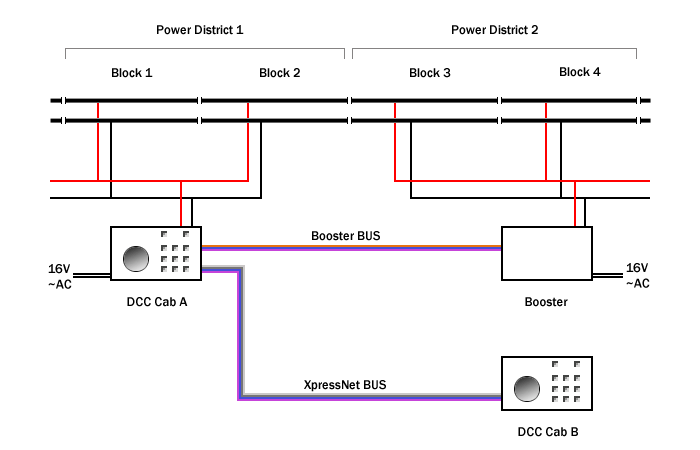 Power Districts driven by two Boosters. Cab A is a combined command station and booster.