Summary: A section of track which allows a train to reverse direction is a Reverse Loop, sometimes called a Balloon Track. Electrically they represent a problem on the layout, as Rail A meets Rail B at the turnout, causing a phase mismatch. Careful wiring, installation of gaps, and a method of switching rail phase are required. Wyes also require this attention.

When you heard about Digital Command Control and all its advantages they told you there is no need to worry about polarity issues and reversing sections. Not quite true!

Except for 3-rail track, all electric train layouts have to be specifically wired when it comes to reversing sections of track. A reversing section allows an engine (or train) to enter in one direction, and leave on the same track heading back the way it came. Reversing sections include: Wyes or triangles, turntables, and reversing loops (ballon tracks).

The AR1 is Digitrax's product to provide automatic reversing of track phase whilst a train passes through a reversing section. Although the AR1 is used in these examples and diagrams, there are many other products from various manufacturers which work just as well (and some argue better) than the Digitrax AR1. We highly recommend you check out reversing units from various manufacturers and vendors before making your final decision. A Frog Juicer can also be used in this application. 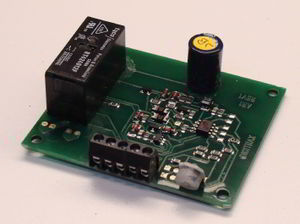 Connection is simple via the two pairs of wires: one pair feeds track power to the AR1 (shown on the right, above) and the other feeds from the AR1 to the loop. The gaps in the rails are essential: they isolate the two opposite phases of electric power (see DCC Tutorial (Power)). Electrical gaps must exist in both the places shown. These gaps can be made by using insulated rail joiners or cutting the rails and filling the gaps with an insulated material such as styrene. Other devices available on the market work in much the same way. 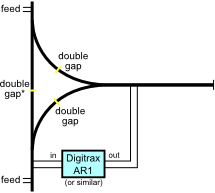 A turnout for a wye. Note the live frog's point rails: They will create a short.

If the gap is created by cutting the rails, it is important to fill the gap with a non-conducting material such as styrene. Filling the gap with an appropriate thickness of styrene will prevent the gap from closing up during expansion cycles, or wheels falling into the gap. While the expansion of your rail is not very much, it can be enough to close the gap. Movement of wooden benchwork during expansion and contraction can contribute much more.

The gaps must not be staggered to prevent other issues from occurring. Definite boundaries between the loop and the inbound/outbound track are required.

MRH DCC Impulses columnist Bruce Petrarca shows you a quick and easy way to find out if you have any reversing loops on your model railroad
Retrieved from "https://dccwiki.com/w/index.php?title=Reverse_Sections&oldid=24844"
Categories:
Last Edited: 6 May 2021.