Summary: A Digitrax term refering to address management for locomotives under control by a Digitrax DCC system.

Slots are a concept used in Digitrax command stations. The number of slots available determine how many locomotives you can operate.

The concept is similar to that of a "heap" used in Computer Science: It is a portion of memory set aside by the program you are running to store variables and frequently used data. In this case, a given multifunction decoder is assigned a slot by the command station's software which contains the address, direction, speed mode, functions and consist information for use later. It also contains information regarding the throttle controlling this multifunction decoder.

The Zephyr has ten and Zephyr Xtra features 20 slots. The Empire Builder has 22. The Chief and Super Chief have 128 slots. See the Digitrax Command Station Comparison for more info.

JMRI offers a suite of LocoNet tools that can be used to monitor changes in real time.[6]

A slot has one of four states:

Any slot while in use which does not receive updates from its associated throttle after a period of time may be marked as Common or Idle. If a slot's status is Common and the speed is set to Zero, the slot may be purged by the command station at a later point in time.

What Does it Mean?

A slot labelled Common is being refreshed by the command station, has no throttle (or other LocoNet device) assigned to it, and is unavailable for use with another multifunction decoder address. An excessive number of common status slots is often a result of operator discipline, or lack thereof. With proper discipline the number of slots with common status can be managed.

Releasing an address on a throttle sets the status of that slot to Common. If a LocoNet device takes control of that slot, its status will change to In Use.

If an operator inadvertently selects an incorrect address on a throttle, that address should be dispatched before a new address selection is attempted. If a new address is entered without dispatching the prior one, the first address will have its slot changed to common. By using Dispatch, the slot is made idle and available for use

UniVersal Consisting is the default Digitrax consisting method. Addresses in a consist remain in common status until the address(es) are removed from the consist. This ensures addresses are not removed inadvertently from a consist by reuse of their slot.

This slot is available for re-assignment to a new address. By using Dispatch the status of the slot is changed to Idle, instead of Common.

Any address which is permitted to Purge will have its slot status changed to common.

Slot Zero is a feature which appeared on the DCS210[7], when activated all locomotives had their speed set to zero and all functions off. It could be accessed with a DT500 throttle, or the Loco Reset button on the DCS210. The command station should be set to the Sleep Mode after use, when the system wakes all throttles will be forced to speed zero.

If there were any other active throttles connected to LocoNet when this feature is activated, they would override Slot Zero.

It is possible to manually clear slots using the throttle, the typical procedure with an advanced throttle is to select the locomotive address and press EXIT. This is not the same as Dispatching.

This warning indicates the maximum number of slots available (or memory set aside for this) has been reached. Until they are cleared out, this message will persist. This can be done using an option switch (see your manual) or JMRI's LocoNet tools.

The main cause is locomotives which were not correctly dispatched by their operator after an operating session.

On a DT500, DT400 or DT300, the display will show Slot=Max. Older DT100 or DT200 throttles will display FF, and the Zephyr shows FULL. All these indications mean that the number of slots available is zero, as all are in use.

Closing Option Switch 36 clears all slots in the command station (including “UniVersal” consists) currently in the system, leaving all other option switches as set. Once accomplished, the throttle will be able to select addresses again.

The following process is recommended for clearing the slots.[8][9]

OpSw38 clears the Alias Address Roster, a legacy feature allowing the use extended addresses with decoders supporting only Primary addresses. The DT100 throttles can use this feature, which is rarely used today.

The DCS240 command station offers an additional range of slots, called Expanded Slots. These slots are only accessible to the DT402R2 or higher throttle. Legacy throttles can access 120 slots only. The DCS240 handles this automatically by identifying the throttle type. The DCS240 offers up to 400 slots in this manner, instead of the typical 120 slots offered by other command stations.[11] 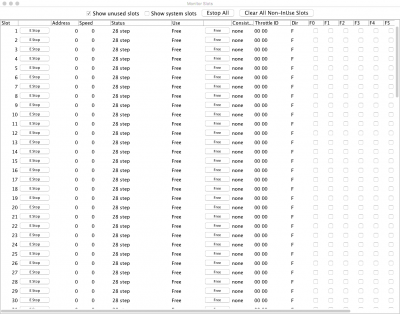 If you have a computer interface for your DCC system there are software products that allow you to see a list of all the slots on your command station, and indicate the status of each slot. Some also give you the capability to free slots with the click of a mouse button.

If the slot status changes, or is purged by the system to be used by another decoder address, it does not mean all the data is cleared from the slot, only the status flag has changed, the data stays there to either be re-used by another LocoNet device (COMMON), or purged so new data can overwrite the existing data (IDLE).

Each slot has a purge timer, but that timer is not always active, this will only happen when certain criteria is met.

How it all works:

When a LocoNet device (Throttle) is maintaining a SLOT in the refresh stack it will be required to check that the SLOT status matches its internal state before reusing any SLOT. If a device disconnects from the LocoNet and does not access a slot within the system's PURGE time, the Master (Command Station) will force the SLOT to "COMMON" status so other system devices can use that SLOT.

Typical purge time of a Master is from 200 to 600 seconds. Slot update activity is about every 100 seconds, i.e. if a user makes no change to a throttle/slot within 100 seconds, the throttle/device should automatically send a speed update at the current speed setting to reset the Purge timeout for that Slot.

Note that with a LocoNet wireless throttle, (IR/Radio) you can see the ping or update being sent while the throttle is in Power Save mode, it will wake up, send, then go back to PS approximately every 60 seconds. This prevents the system from releasing that address and making it available to another throttle.

Before an address will be purged, the following criteria must be meet.

Before removing a throttle from the layout:

The above steps go a long way to keeping the FF or Slot=Max status from showing up.

The term UniVersal is a Digitrax registered trade mark. It is used to name or describe their command station assisted consisting. Digitrax actually uses what is called Unified Consisting, the system allows three modes of consisting, Advanced, Basic, and UniVersal, and may be mixed, matched, and even nested inside other consists. It is Unified because it can be done automatically without user intervention as they set up the consist.

Consult the manuals for your system to determine the correct option switches for your command station.

OPSW 13 changes purge time from 600 to 200 seconds. Good for faster, more rapid purges, bad for tethered throttles, as when an operator unplugs a non-wireless throttle from the LocoNet they now have 200 seconds to plug in elsewhere. OPSW 14 can completely stop purging from happening.

OPSW 15 controls the speed value, can be set to force speed value to 00 upon purge. This prevents runaways from happening should an address be purged while a train is in motion.

Slot Following refers to operation of a stolen locomotive. When this happens the throttle will click every time the remote throttle initiates a speed change. The display will also change to indicate what is happening.

This feature allows two DT throttles to control a single address. Both throttles will show the speed and direction on their displays. This can be useful for training operators, allowing the mentor to take control without having to take the throttle physically from the operator.

Another application is computer control: A computer running CTC and routing control programs on LocoNet can provide some automatic control over the train. It can change speed or stop the engine, while letting the engineer holding the throttle know what is happening.

Operating a Stolen Address on a DT40X Throttle

When the command station detects that a loco address that is in-use on one of its throttles is being changed by another throttle or computer, it will cause the throttle to “click” every time it sees a remote throttle change its locomotive settings. If that locomotive is in the active throttle, its speed display will also show the changes. This is called slot following.

This allows two DT throttles to run a single locomotive address with both throttles able to send commands to the loco. Both throttles will show the current speed and direction of the locomotive in their displays.

Slot following is useful for training new operators. The supervisor can “steal” a locomotive that is selected on a trainee’s throttle & be able to “look over the trainee’s shoulder” and closely supervise that locomotive’s control. The supervisor can gain instant override control without having to physically “grab” the trainee’s throttle. This lets you have unskilled visitors participating and enjoying operations without too much anxiety for either party.

Slot following also allows a computer on LocoNet to run CTC & routing control programs with automated control over locomotives. The computer can control speed and stop engines automatically while letting the engineer with the throttle in his hand know what is happening.

A ghost throttle is one that you are not aware of. It was used to steal control of the locomotive and is still active. Erratic operation is often the result, as the command station overrides your throttle using the ghost throttle settings.