What is a Stationary or Accessory Decoder ?

NCE Stationary Decoder - this one is for switches

An NMRA compliant stationary decoder is known as an accessory decoder and is intended to be controlled by the same type of DCC power used for mobile decoders. From a DCC perspective, the main difference between the two is that they use different addressing and have different types of outputs. Whereas a mobile decoder controls a drive motor with all its speed controls, momentum, braking etc., a stationary decoder is only concerned with on/off (or "forwards/backwards") type functions for accessories.

The extended address partition for the multifunction decoder is 192-231. The first byte of the 2 byte address can only contain values from 192 to 231. The second byte completes the address. The accessory decoder will only respond to packets when the first address byte contains values from 128 though 291.

For example, the extended multifunction decoder address of 128 transmitted by the command station would begin with the value of 192, followed by 128. So your accessory decoder would just ignore it.

A primary use of stationary decoders is to control turnout motors and so some are specifically designed with this purpose in mind. There are two common types of turnout motor; solenoid (e.g. Peco Point Motors) and stall motors (e.g. Tortoise Switch Machines) and each requires a different kind of electrical drive. The solenoid type require a short but powerful pulse of current to snap the turnout from one way to the other whereas the stall type require a constant but low current to drive a geared motor slowly from one side to the other. They are called stall type because they will stall when they reach the mechanical limit and the stall current can be maintained indefinitely to hold the turnout blades in position.

Solenoid motors are best driven by a capacitive discharge device that uses the energy stored in a large capacitor to supply a short powerful pulse to the electromagnet without the risk of overheating it. Some stationary decoders have this capacitor built in, others simply allow you to set the pulse duration. Solenoid types can be 2-wire or 3-wire; the 2-wire ones use a single coil with the polarity of the DC voltage determining the direction of throw whereas the 3-wire ones use two coils, one for each direction.

Regardless of the motor type, a pair of decoder outputs is required for all turnout motors, one to set the primary route and one to set the diverging route. This output pair has a single DCC Accessory Address.

Another common use for stationary decoders is signaling; either electromechanically operated semaphore arms or colour light signals. Again, standard practice is to use a pair of decoder outputs to drive a single signal. For Multi Aspect Signaling, where there are more than two lights involved, things get a bit more complicated.

Of course a stationary decoder can be used to control any other simple on/off function such as structure lighting, animation effects, crossing gates, water pumps, etc. Also, there are no DCC police to say you can't put a stationary decoder into a piece of rolling stock. For example, you could install a small one in a dining car to control the lighting.

To summarize, this table shows the various types available:

A stationary decoder may take its power from the track supply or another separate DCC supply bus. This is obviously the only method available if the decoder is mounted inside a piece of rolling stock.

A stationary decoder can be powered from a completely separate power source even while receiving its control signals from the DCC track power or other DCC supply bus. This has several advantages as described below (see Avoid Connecting to Rails).

To be considered "DCC", a stationary decoder must be able to receive control signals from a DCC power supply, regardless of where it is actually drawing its power from.

Some stationary decoders only accept control signals from proprietary throttle networks, these are not really DCC and are unlikely to be compatible with any other manufacturer's equipment.

Most stationary decoders can be connected directly to the track for both rail power, and to receive DCC commands (tell them what to to do). However: 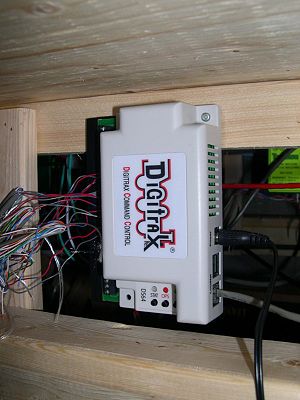 Using the track power for commands instead of a throttle network connection can result in an endless loop taking place. A locomotive shorting out in a turnout will shut down the track bus. The stationary decoder cannot clear the short by moving the points if it gets its commands from the track, since the short will trip the protection again, before the points can be moved to clear the short. The track bus is reenergized, and the cycle continues...

Using a separate bus for device commands will eliminate that problem, as the stationary decoders will get their commands independently from the track bus.