Summary: All Digitrax throttles currently in production support infrared (IR) wireless communication. This requires a line of sight to a UR90, UR91 or UR92 Utility Panel. When in IR mode, these throttles operate in simplex mode, so they must be plugged into a utility panel to acquire a locomotive or steal one.

The R suffix indicates the throttle is radio equipped. R Throttles are also simplex mode, operating in the same way as an IR throttle. Radio communications require the UR91 panel.

The D suffix indicates a Duplex mode radio throttle. They function exactly the same way as a wired throttle. The first time they are used during an operating session they must be plugged into a utility panel, so the system can identify and configure the throttle. Once that process is completed, the throttle can by used wirelessly for any operation, including programming. Duplex throttles require the UR92 panel to operate wirelessly. 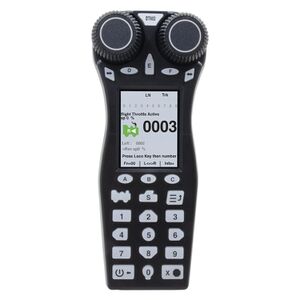 This throttle has a number of new features. First is a completely new, more ergonomic case. While very similar to the DT500 series, it has been completely redesigned, with a larger colour LCD and much fewer pushbuttons. For wireless operations it uses three AAA cells instead of a 9V battery, and features an On/Off button. The throttle has power saving modes, and will accept rechargeable AAAs as well. While it does have a cord for connection to the layout, it unplugs from the throttle.

The DT602D features Duplex Scanning to find available networks and signal strengths. It does not need to be tethered to do join a throttle network wirelessly.

Also see the video review of the DT602D.

The UT6 Family appeared in late 2020. The UT6 is the tethered version with a UT6D and UT6DE being wireless duplex throttles.

The UT6 replaces the UT4 series of throttles.