If a function decoder is installed with another decoder, the decoder lock feature may be used. This will allow programming one decoder without changing the other.

The function decoder can have its own address, or share one, such as an installation in a locomotive. By sharing the address, the throttle can control both decoders simultaneously.

This is a Digitrax feature, used for signaling, train identification, and the Soundtraxx SurroundTraxx audio system.

ALCO C424, the classification lights are above the number board. 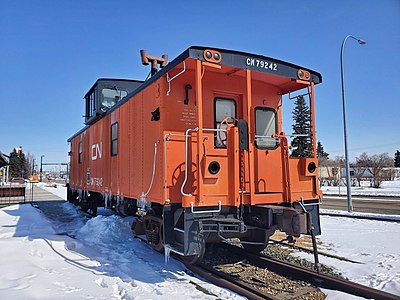 Notice the marker lights below the roof. 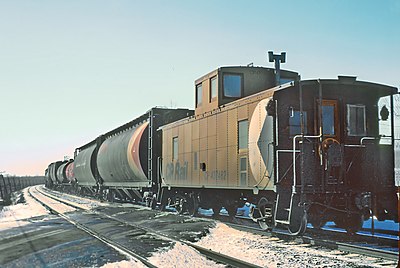 Function decoders can provide control of lighting in passenger cars and cabooses. A simple single function decoder will suffice for lighting.

Independent control of the lighting for number boards

In addition to lighting effects, a multiple output function decoder can be used to operate strobes, marker or class lights.

Locomotives usually have classification lights, which indicate the class of the train:

Some locomotives may be equipped to two small red lamps which are used to indicated end of train when being used as a helper at the rear.

Cabooses had lanterns, which were later replaced by electric lights. These markers were at the rear of the train.

The conductor or a crewman would orient the lantern so the correct colour was showing. Later this would be done by turning the appropriate lamp on or off. Canadian National's modern cabooses also included headlights which could be used to examine a passing train, or for reverse moves at night.

It is possible to add animation using a function decoder to operate a feature of the vehicle. One possible application is to operate the coupler(s).

Not all DCC manufacturers supply function only decoders. Check their websites for specifications and available decoders.

The TL1 Single Function Decoder can be used as a function only DCC decoder with or without transponding, or as a transponder only.

It features a single 125mA function output for lighting or other purposes. It also has a strobe light output which can be programmed as a strobe, Mars Light, or a FRED. It can be controlled via F0, F1, F2, F3, or F4.

Many support RailCom and SUSI, as well as Primary and Extended addresses..

ESU offers the LokPilot FX V4.0, DCC with RailCom® as well as Motorola® and Selectrix® it can be operated with all common digital command stations. Its flexible function key allocation and the various light effects are typical ESU V4 decoder features. The LokPilot V4.0 is available in two interface versions: the “classic” 8-pin NEM 652 wire harness version as well as a 21MTC interface version.

It supports the ZIMO HLU braking commands or the Lenz ABC system. Braking with DCC brake generators or Brake on DC is supported.

The LokPilot Fx V4.0 decoder has 6 function outputs. The wire harness version is usually amplified. The 21MTC version offers an amplified or a logic level for AUX3 and AUX4. All important light functions are available. The brightness of each output can be adjusted separately. Function outputs are current overload protected.

There is also the LokPilot 5 FX Micro DCC with similar specifications.

ESU also offers their new LokSound 5 FX, which offers sound and functions but no motor drive. It is available with the 8 pin NEM652 connector, or the 21MTC interface.

Also available is the 73800 Function Decoder.

Zimo offers a number of function only decoders.