Common rail wiring was often used with analog control, as it reduced the amount of wire needed and the complexity of the circuit. With DCC, it introduces new problems. When additional boosters are added to your DCC layout, incorrect signals can appear at the input to your booster. The solution is to purchase command stations and boosters with opto-isolated inputs, which usually cost more.

Most manufacturers tell you not to have a common rail or common power bus wiring between booster or power districts. This is just here to help them make the point clear. Gap both rails whenever you make a gap. Do not connect any power or programming wires from one booster output to another's output. From NMRA Data Sheet D7p: Common Return Systems 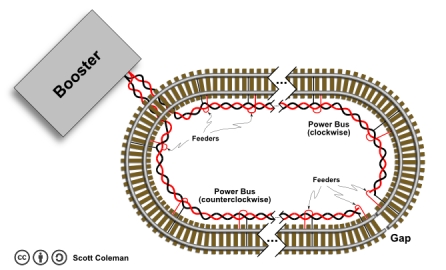 Rail joiners are not shown in the illustration: the gap itself is bridged by insulating rail joiners, and as always, feeder wires are run from the power buses to each rail segment, rather than relying on rail joiners to supply power across your layout. Power buses are illustrated as twisted pairs. See the Wire Sizes and Spacing article for discussions on twisting your bus wires.

Although a lot can be done with power-routing turnouts, it usually just lets 2 trains take turns on the layout. It's not true two-train operation.

Block divisions are normally at 'logical' places, such as a section of main line with one or two sidings; a length of mainline with a passing siding may have two blocks: one for the main, and one for the siding; a long chunk of main line with no other tracks; various sections of a yard (inbound, outbound, classification tracks); or an engine terminal (engine storage, maintenance tracks, roundhouse, etc). It's all up to you and your operational needs.

There are two common methods of dividing the track on a layout into "blocks": Common Rail and Un-Common Rail (Home-Run) wiring.

Common Rail Wiring is so named because one rail throughout the entire layout is unbroken – it is "common" to the entire layout (and all power packs). The common rail is constructed and wired so that it is electrically connected everywhere it goes (except reversing loops!). One terminal of each power pack is designated the "common" terminal. It doesn't matter which one you select, although if the power packs are the same, it is usual to select the same terminal on each pack. The Common Terminals are connected to the Common Rail. You connect all of the Common Terminals together, then connect the wire to the Common Rail of the layout. Depending on the size of your layout, you may need several connections to the Common Rail at various points around the layout to avoid voltage drop.

The remaining rail is broken into electrically isolated blocks. At the selected block boundaries gaps are cut in the non-common rail. To prevent problems due to expansion and contraction randomly connecting the 2 ends, either standard insulating rail joiners are inserted, or the rail is cut and a dab of glue (epoxy, Ambroid or 'goo') is dripped into the gap to prevent the cut ends of the rails from ever touching. Once the glue has cured, remove any execss glue from the top and inside of the rail.

Un-Common Rail/Home Run Wiring is similar to common rail, with the following differences:

The term Home Run will be used to indicate the "Uncommon Wiring" technique.

Regardless if you are using analog or DCC, your wiring must be neat and organized! You just do not twist the wires from the layout together in a knot and hope the electricity flows!

Also, pick a color code for all your wires, and stick to that color code no matter what.