A commercial DCC Compatible turnout manufactured or wired for use with Digital Command Control.
Turnouts

Commercially manufactured turnouts are often labelled as DCC Friendly or For DC and DCC Use on the packaging. All turnouts are compatible with DCC, older ones may need some attention to the mechanical and electrical aspects of their construction.

The most obvious feature of a DCC Compatible turnout is the gaps which electrically separate the frog from the closure and point rails. The frog is often unpowered. Others may use a cast plastic frog, or a hybrid of metal rails and plastic.

The Issue with Digital Command Control and Turnouts 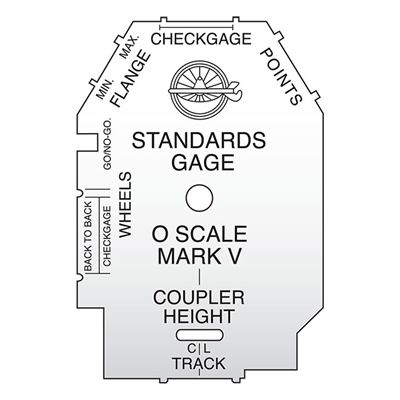 When track work and wheelsets are properly gauged, there should be no momentary short circuits occurring at turnouts. The backside of the wheel should not graze the open switch rail and cause a short between it and the stock rail.

Digital Command Control Boosters are sensitive to sudden changes in current flow. Just the wheel grazing the switch rail and allowing current to flow can be enough to trip their protection circuit and cut power.

Older technologies employed by analog power supplies were not as sensitive to a momentary short. Often, they didn't deliver enough current to do a lot of damage either. DCC Boosters can deliver three times or more current than was typical for analog operations.

The solution is the NMRA Track Gauge. Verifying turnouts with the gauge will show if there may be problems or not. Many commercial offerings have compromised the clearances required. Verifying the correct gauge of the wheel sets on your rolling stock will also identify offenders which may cause an issue. The gauge will measure clearances at the switch, flange ways, track and wheel gauge. Hand laid track usually has no issues with DCC as the NMRA Gauge is an integral part of making a turnout.

Also use the NMRA gauge to verify your wheel sets are in gauge. Many track manufacturers will recommend the use of NMRA RP-25 S4 profile wheel sets for the best results. RP-25 recommends a 3º taper on the tread, which when lacking can cause issues. The taper, in concert with the profile of the rail head, keeps the wheel centered on the rail which aids in proper tracking.

The Ideal Turnout for use with Digital Command Control has the following features:

It is also important that the turnout is gauged properly using an NMRA gauge, as well as the wheelsets. Shorts between the stock and switch rails are a source of problems.

A Turnout is made of two parts:

A complete assembly consisting of both a switch and frog is called a turnout.

Unfortunately there are a lot of diagrams labelled with incorrect terms available on the Internet, which cause confusion when attempting to identify components for trouble shooting purposes. The DCCWiki uses the same terminology the prototype does to describe a turnout (Switch + Frog).

Also see this video from Fast Tracks: How A Railway Frog Point Works. See below for more links.

Turnouts which are advertised as "power routing" are wired so that the switch rails are electrically connected to themselves, the frog, and the point rails beyond the frog. Power is routed depending on how they are aligned, often by the mechanical contact between a stock rail and the switch rail. In older turnouts, the two switch rails were often connected together with a metal strap at the throw bar.

If the switch rails are connected electrically via a metal throw bar, this turnout may have issues with short circuits occurring should a wheel bridge the gap between the switch and stock rails. DCC systems are very quick to react to a short circuit condition, unlike analog power supplies. 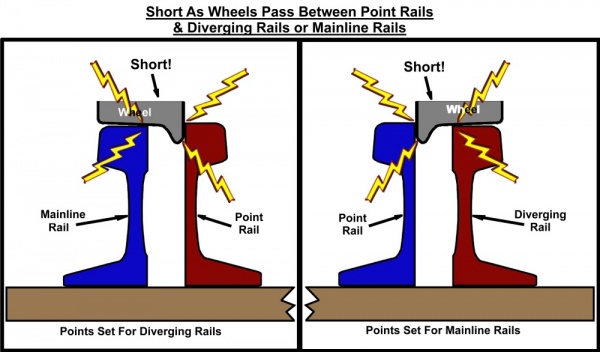 Power routing turnouts may not be DCC Compatible.

There is no advantage to power routing as there is no need to control the power flowing into sidings. For DCC the track is powered all the time. With some turnouts shorts can occur if the point rails are one electrical unit, or if a wheel tread bridges across them. For this reason, the point rails should be isolated from the diverging and main routes, as that track will be energized and the adjacent point rails do not share the same phase.

If the frog is powered by a switch, it is important that it disconnects before making the new connection (Break before Make).

A turnout labelled as DCC Friendly is one designed for use with DCC. The switch rails are not connected together, instead they share the phase of the stock rail nearest to them.

The frog is often unpowered, and gaps sever the electrical connection between it and the switch rails. The frog can be powered with an external switch if necessary.

DCC Friendly turnouts can be Live Frog (All Live) or Dead Frog. With live frogs, the power must be fed to frog by some mechanism that switches the phase to match the route set. This can be a electronic device called a Frog Juicer, the contacts on a Tortoise slow motion switch machine, or the contacts on solenoid or motor driven switch machines. It is also possible to power frogs using some manual throws with contacts.

Frogs can be powered if needed, often because some locomotives will stall on them. This is usually needed for short wheelbase locomotives, like switchers, with four axle trucks, or an 0-4-0 or 0-6-0. Between a dead frog and dirty rails, the loco can stall. Those with all wheel pickup are less likely to have problems than lower cost units with fewer pickups.

With analog, the practice was to gap the point rails just past the fouling point (where two trains on adjacent tracks can collide).

For DCC, the gap in the point rails should be much closer to the heel of the frog, to eliminate a potential short should a train run past the fouling point gap.

While these may not be the ideal turnouts, they can be adapted for use with DCC. Click on the links below to see how.

The wiring of these new turnouts is a development of both the Insulfrog and Electrofrog designs. The stock-rails are wired to the centre-rails at the factory, which in turn are connected to the corresponding frog-rail. This means the turnout is completely live (except for the tip of the frog), no extra wiring required. If the turnout is being used as a switch to isolate a section of track, then it is simple job to remove the wire that joins the centre-rail and stock-rail and it will work like a current Insulfrog.

The Peco Insulfrog turnouts have a small insulated frog and on initial inspection they can appear to be live frog because the metal point rails are close together. Because of this, it is possible to have a short if a metal wheel bridges the two rails. Usually, this will happen with wheels that lack the 3º taper recommended in NMRA RP-25.

The Peco Electrofrog turnouts are power routing right out of the box and therefore are not DCC Friendly. However, they are designed to be easily be converted for DCC operations. The point rails must have insulated rail joiners as they will create a short without them. The phase of the point rails is determined by the position of the switch rails.

Shinohara of Japan made quality turnouts, Walthers would later distribute them under the Walthers/Shinohara name. Walthers has taken over the product line following Shinohara's decision to cease trading.

There are two types of Shinohara turnouts out there. Newer ones are DCC compatible, and state that on the package. Older ones are not, as the power is routed by the switch, and the switch rails share the same connection.

Clicking on these images does not work, so they are presented as a slideshow. Images courtesy of, and with the permission of Fast Tracks

Note that the switch rails share the phase of the stock rail adjacent to them. This makes them DCC Friendly, as a metal wheel's flange touching the switch rail will not create a short between the switch and stock rails. The frog is being powered by contacts included in the ground throw mechanism. This can be done using a switch throw with contacts, or the contacts on a switch machine.

Fasttracks (user name FastTracks Tools) has posted a number of videos showing how to make a turnout using their fixtures.

Model Railroader Senior Editor Jim Hediger demonstrates how to use this versatile model railroading tool from the National Model Railroad Association. You'll learn how to maintain standards for zero derailments.

What is the difference between Peco Insulfrog and Electrofrog turnouts?