Summary: The PECO Electrofrog is problematic for Digital Command Control, by nature of its Power Routing capability. Simple changes will make it work flawlessly with DCC.

Quick link to this article: https://2tra.in/W0Quc

PECO manufactures a number of turnouts in various scales and rail sizes.

They offer several types of turnouts:

The electrical power routing of the Peco Electrofrog is different than that of the PECO Insulfrog.

The Electrofrog is a well designed turnout. There is no plastic for wheels to run on. The positive locking action of the switch points makes it the ideal turnout for anyone's layout.

The main feature the metal wing rails, resulting in an all metal frog. The Insulfrog may have an all plastic (non-conducting) frog, or a metal one with gaps.

Be aware of the images used to illustrate PECO turnouts. In many advertisements the pictures are of Electrofrog turnouts, despite the ad copy saying differently.

With DCC operation, there are a couple of problems. The solutions, however, are simple.

How to Spot the Differences between Electro and Insulfrog Turnouts

There are a number of mechanical, electrical and physical differences between the two models.

The Peco Electrofrog switch was designed in the days of analog operation with the ability to power sidings depending on which way the switch rails were aligned. Drive a locomotive into the siding and then set the turnout for the mainline route. We could rest assured that the locomotive wouldn't creep away on us - assuming there were no additional track power feeds to the siding. The turnout would function as an electrical switch in addition to its duty as a track switch.

Basic Rule of Electricity: Current will only flow if there is a difference in potential between two points. We could then flick the switch rails on another turnout which held another locomotive on that siding, then operate that new locomotive. This ability had everything to do with how the Electrofrog was wired - By a combination of the rails and wire bonds on the underside, the switch rails acted as an electrical switch that routed power to either the mainline or diverging route via the point rails.

Electrical Behaviour of an Unmodified Electrofrog

Ohming out an Electrofrog will reveal a few basic truths: (Refer the photo above)

Digital Command Control eliminated the requirement for power-routing switches. Locomotives only moved when told to move (via the throttle). When parked, they stayed parked, even though there was still power on all the rails. We also added all kinds of track feeds because we didn't have to worry about power-routing to sidings, particularly around turnouts.

Good DCC wiring practice requires track feeds before and after a turnout. Which caused problems with the Peco Electrofrogs. Because the switch routed the power, depending on how things were wired, Electrofrogs shorted the DCC power bus.

These modifications are recommended by PECO, and illustrated in their data sheet. See the links at the end of this page for links to various PECO documents.

The Electrofrog does not require modification for use with Digital Command Control as found in the package. The modifications listed help improve reliability over time.

When you set the switch for the mainline route, the switch rails of an Electrofrog continue to power-route as before. However, because the addition of an insulated rail joiner on the point (inside diverging) rail, we no longer have a short, notwithstanding that both point rails, the straight closure rail and curved closure rail have the same phase.

When you set the switch for the diverging route, the switch rails of the Electrofrog continue to power-route to the diverging route. And, because we've added an insulated rail joiner to the (inside mainline) point rail, we no longer have a short, notwithstanding that both switch rails, the straight and curved closure rails are the same (red) phase. As a minimum, if you are using Peco Electrofrogs, you must install insulated rail joiners on the point rails. Or gap these rails and fill the gaps with epoxy or styrene. NO EXCEPTIONS!

We still have the problem, where the wheels of our locomotives may create a short between the stock and switch rails. This is especially true for steam locomotives and 6-axle diesels. This wasn't an issue with Analog operation, but DCC is very sensitive to even the shortest time period when an issue like this occurs. One solution is to check the wheel gauge of all your motive power and rolling stock, making corrections as needed. 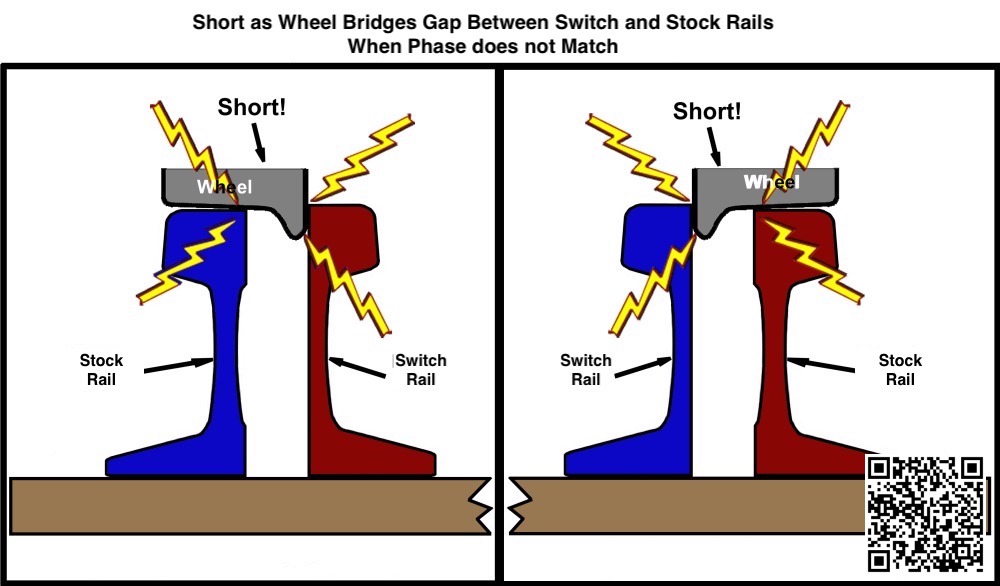 Taking a look at the above illustrations, the red switch rail shorts to the mainline stock (blue) rail as the locomotive goes through and its wheels span the gap between the two. OR, the blue switch rail shorts to the red stock rail as the loco goes through. If you still don't see how this happens, take a look at the graphic below. (The nomenclature in the illustrations is incorrect: Point rails are at the heel of the frog.)

As part of the process, verify the wheels and rails are in gauge with an NMRA gauge.

This is what makes a turnout incompatible with DCC.

So far, you've taken care of Step 1: Adding insulated rail joiners to the point rails beyond the frog. This gets rid of the "built-in" short. We may still have an intermittent short as our locomotives go through the switch between the switch and stock rails. To get rid of this short, we're going to disable some of the circuitry (NOT the rails) and make modifications to the wiring.

In an Electrofrog turnout, the switch, closure, wing and point rails are one unit electrically. The following modifications make the switch and frog independent of each other. The phasing of the frog and point rails will be controlled externally.

This will be in three extra steps and will be done on the underside of the PECO Electrofrog.

Peco has begun discontinuing the Electrofrog product line. As of December 2020 the #6 Code 83 turnouts are discontinued and replaced by the SL-U8361 and SL-U8362 Unifrog.

There are a number of data sheets, in various languages, available on the PECO Technical Page. This link goes to the English Code 83 Electrofrog turnout. OO/HO Gauge Electrofrog Turnouts/Crossings (Code 83)