The Wangrow SystemOne was shipped in late 1994, retailing for $879. Wangrow Electronics ceased trading and was dissolved in 2003. 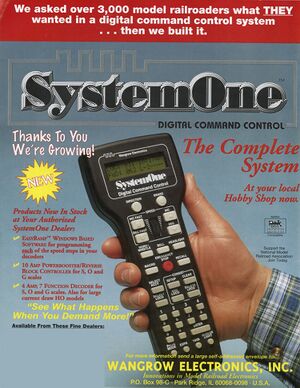 Wangrow Electronics Inc. founder, Don Wangrow, passed away in June 2003. Wangrow Electronics ceased trading and was dissolved that year. The Wangrow SystemOne shipped in late 1994, retailing for $879. In 1995 Wangrow announced a 4A seven function decoder for large scale locomotives. While it has reached end-of-life and is no longer supported, the Wangrow SystemOne is still a good system for those looking for a DCC system. It was a full-featured product in its time, and is still useful. Even used, they are still a good buy.

These ID codes are issued by the NMRA. For more information, see Decoder ID. 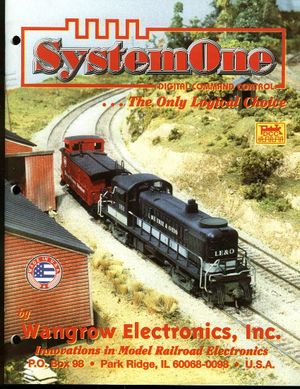 The SystemOne Digital Command Control system was also known as the SYS1.

The SystemOne was originally designed by a third-party contractor which also manufactured the hardware. Software was supplied by NCE, which would also supply some of the hardware designs, such as the command station. The dual booster, MasterCab/Procab throttles and decoders were designed by a contractor, as was the cab bus using a 1/4" phone plug. Another manufacturer designed and supplied accessory decoders.

The SystemOne was introduced at the Chicago Model and Hobby Show i October 1994. [1] 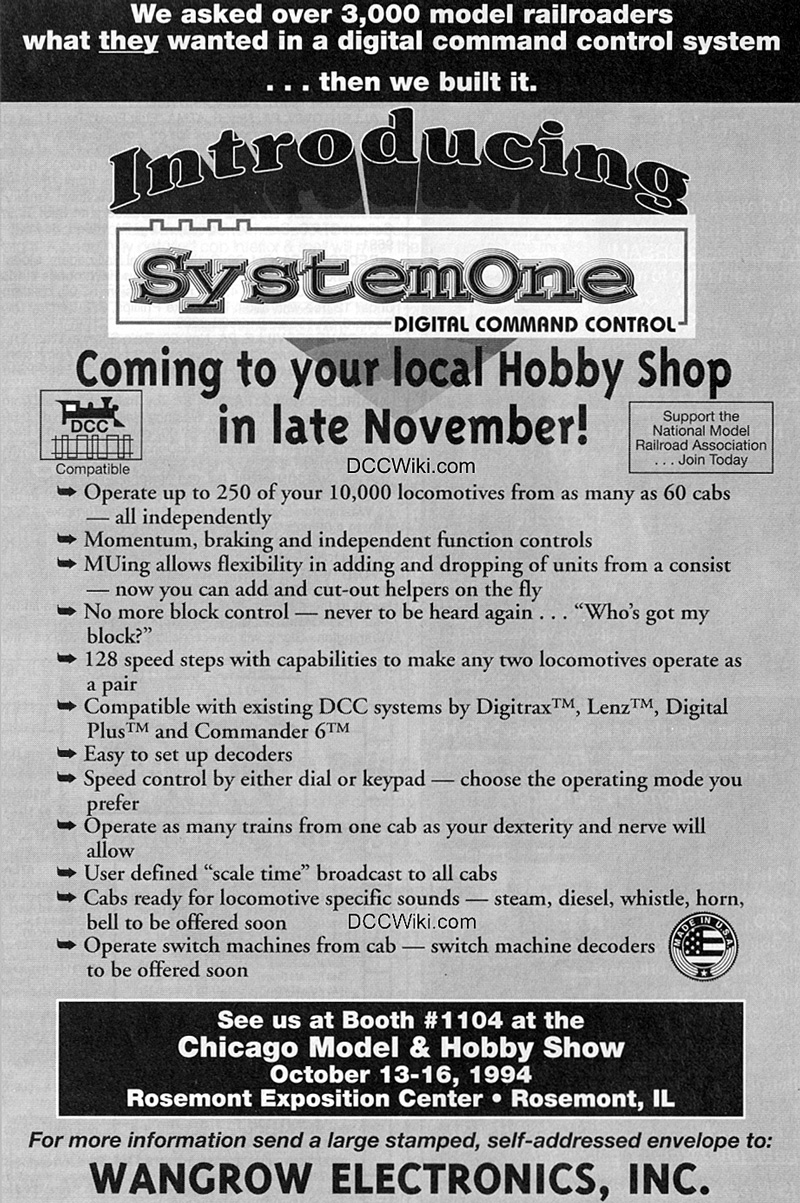 Wangrow claimed the following was possible:

The SystemOne consisted of the CSP-01 command station and SRB-01 booster and block reverser. A WCT-01 walk around controller was also included. Additional boosters were $249.50, throttles $183.50. Later the WCT-31 intermediate and WCT-11 throttles appeared.

In 1996 Wangrow released software in the form of Commando, which could restore the command station's settings, and LocoCommand, for automating layout operation.

Many of the parts used to construct their systems were OEMed from NCE. NCE did much of the design, software and construction for the Wangrow SystemOne.

With the introduction of the NCE Power House Pro, NCE became independent of Wangrow for sales. NCE offered Don Wangrow the system, but he passed on selling it. NCE felt that new products arriving from companies such as Digtrax benefited from advances in technology, allowing them to offer a superior product at a lower price. NCE wanted to sell the Power House Pro at a competitive price, deciding to sell at the same price as the SYS1 to avoid undercutting their former partner. By integrating the command station with a single 5A booster it would be possible to retail the system for 30% less than the SYS1.

Unfortunately, Wangrow's vision of the SystemOne as the ultimate DCC system resulted in a very capable system with a price reflecting its position. In time, manufactures from other DCC companies eroded the SystemOne's market position. While maybe not as capable they benefited from the declining cost of the electronics while the capabilities increased. A particular cost was that of the decoders.

In 1999 Wangrow began development of their own software and radio throttles. A 10A system also appeared for $909.

Don Wangrow failed to recognize that NCE owned and licenced the command station and throttle software. When the licensing agreement ended, he could no longer sell command stations and throttles. in 1998 NCE decided to go their own way and would no longer supply ROMs for the Wangrow SystemOne. Without NCE's software licence, Wangrow Electronics had to develop their own software, hiring people without any knowledge of DCC systems (specifically NCE's software) to avoid legal issues.

Developing software began to impact Wangrow's cash flows, making it difficult to pay for product they could sell, which meant they could not supply their customers. Wangrow could not sell SystemOne sets without new software. The final SystemOne ROMs were manufactured in April 1999, after which no more SystemOne sets could be manufactured without new software in their ROMs. Wangrow was unable to develop their own command station software, which doomed the enterprise.

With the death of Don Wangrow in 2003, the company was soon closed and dissolved by the investors. 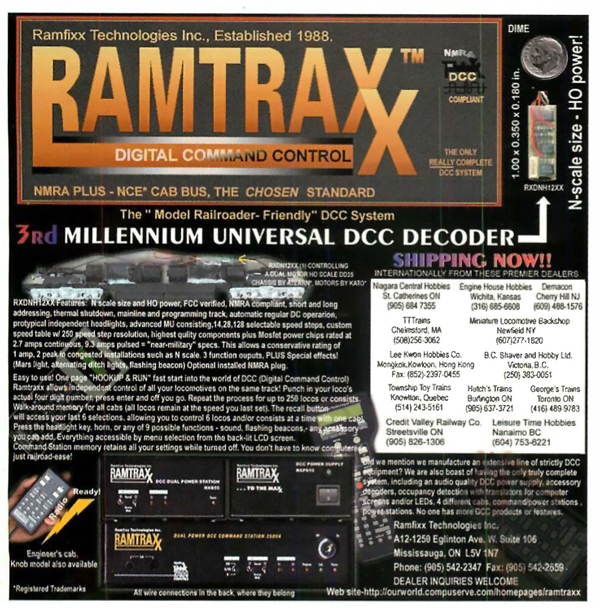 RamFixx Technologies was a Canadian company based in Mississauga Ontario.

Richard Wendt was a model railroader who operated a business called RAMFIXX Corporation which sold RAM (memory) upgrades for computers. In 1995 he decided to build a DCC system. He needed expertise so he collaborated with Wangrow and NCE to develop, manufacture and market his RAMTRAXX DCC System.

RamFixx introduced the RAMTRAXX DCC system, based around the Wangrow SystemOne and NCE technologies, in 1996. The RAMTRAXX system featured a new innovation: both the command station and booster in the same package. By combining both devices into one integrated unit, RamFixx was able to reduce the cost by 20%[4]. Neither the SystemOne or NCE Master System offered this, both manufacturers used separate command stations with external boosters. RAMTRAXX advertisements claimed their DCC system was the affordable choice. The RAMTRAXX system was also unique with dual 5A boosters. Dual boosters were another innovation, but a software bug resulted in a shutdown of both if one booster operating in autoreverse mode encountered a short circuit condition. RAMTRAXX also offered an audio quality 120VA power supply with up to 10A of output current,

Like Wangrow, RamFixx used the services of an OEM to manufacture the system, with NCE licensing the software needed. As noted in the advertisement, the NCE Cab Bus was employed for the throttle network.

RAMTRAXX offered an upgradable EPROM, total compatibility with SystemOne, and the ability to also use boosters from Lenz and Digitrax. Other features included addresses up to 9999, 250 locomotives or consists, up to 63 cabs, and 14/28/128 speed steps. One interesting feature was the keyed lock on the command station/booster. In terms of features, RAMTRAXX and SystemOne were full featured, top of the line systems in their day.

The system was marketed in 1996, and a few years later RamFixx Technologies closed. Wangrow Electronics purchased the assets in 1998. RamFixx lacked the resources to support and service the product line, ending with the sale of their DCC assets to Wangrow.

While similar to the Wangrox SystemOne and NCE Master Series, RamTraxx was unique in the packaging of their DCC starter set.

Ramfixx Technologies was the first DCC company to begin exploiting the power of a computer connected to their DCC starter set. The basic starter set did not come with a throttle included. The buyer could choose from two master throttles, or an engineer cab with computer software.

By choosing the software-based engineer cab, it was possible to set up the system and program the decoders.

Ramtraxx offered two master cabs and a variety of smaller throttles. One master cab looked like the Wangrow/NCE throttles; the other was a much larger unit requiring two handed operations. The larger throttle offered total control of the system with the push of a button.

As the RamTraxx DCC system used the NCE Cab Bus, throttles from Wangow and NCE were compatible, and many products from those brands were also available with the RamTraxx brand.

Park Ridge, IL. - Don Wangrow, president of Wangrow Electronics, Inc. announced that as of July 1, 1998 his firm had acquired the RAMTRAXX line of Digital Command Control (DCC) components formerly manufactured by Ramfixx Technologies, Inc. of Mississauga Ontario. The purchase includes exclusive rights to the RAMTRAXX name, as well as all RAMTRAXX parts inventories and work in process.

“It was an opportunity we couldn’t pass up”, Wangrow commented. We had performed contract manufacturing for RAMTRAXX in the past and knew the quality of their product line. This acquisition adds to our customer base and increases our dealer network, especially in the western U.S. and Canada.

All RAMTRAXX DCC items are fully compatible with Wangrow‘s own extensive line of System One DCC components. Both systems share the same operating buss (sic). Wangrow Electronics is also taking the unusual step of honoring all existing RAMTRAXX Warranties and is planning to fully integrate the two lines under the System One name. More importantly, are Wangrow Electronics will automatically include all present RAMTRAXX owners in future System One software up-grades.

Individuals and dealers interested in acquiring RAMTRAXX components, or information on in warranty and out-of-warranty service for RAMTRAXX items should contact Wangrow Electronics, Inc.

Wangrow's SystemOne appeared in 1994, with features such as four digit addresses, from 0 to 9999, programming on the main (POM), advanced consisting, and a data port (RS232) for easy interfacing with a computer.

Wangrow SystemOne command stations can be interfaced to a computer if it has an RS232 interface. The SystemOne is supported by JMRI.

Some SystemOnes were equipped with an optional analog throttle adapter. A standard nine pin serial cable will not work. See the User's Manual for instructions on making a custom cable.

The last updated EPROMs produced by NCE for the Wangrow SystemOne were Version 12/21/04, December 2004. An updated manual was produced as well.

NCE announced that this would be the final upgrade they would provide for the SystemOne.

For more information on this topic, visit Mark Gurries Website.

Q: What is the Cab Bus

The Cab Bus is a throttle network, which connects the throttle/cab to the command station. It can also communicate with other devices such as accessory decoders, signal systems and boosters.

The Cab Bus first appeared on the Wangrow SystemOne DCC system. It was designed by NCE to connect the command station to the throttle and booster. Also used on the RamTraxx DCC system.

NCE continued using the Cab Bus when it introduced the PowerHouse Pro system under its own brand.