DCC is an acronym for NMRA Digital Command Control. It's a method of taking information from a throttle (think: train controller), having it processed by a command station, which creates a digital packet and passes it to the booster, which amplifies it before sending the digital packet onto the entire track layout.

Each locomotive on the track is equipped with a decoder. Each decoder is programmed with a unique address. A decoder looks at all the digital packets that zip past on the track, looking for packets with its own address.

Once a locomotive sees a command addressed to it, it performs whatever function it's told to do - such as stop, speed up, slow down, turn lights on or off, and activate various engine sound effects.

The standard is defined at the rail. This means that locomotives equipped with decoders from different manufacturers may be used with any brand DCC setup. Though low end basic command stations may not support all advanced decoder functions, they will still be able to control direction, speed, and basic lighting functions.

And now in layman's terminology.

Using an analog control system, in order to control two trains with different directions and speeds, you had to rely on block control. This involved lots of wiring and double-pole double-throw (DPDT) switches, which electrically divided a layout into sections or blocks. By dividing the layout into separate electrical blocks, you could control whatever train was in that block.

If you wanted to move your train from one block to another, you had to check and make sure that the DPDT switch was thrown in the right direction. The throttle didn't control the train, it controlled the track. When the train passed from one block to another, you had to change the track you controlled in order to maintain control of the train. If the two trains somehow ended up in the same block, there was no way to do anything about it.

However, if you wanted to run more than two trains, you had to install a whole bunch of special rotary switches – a complex and expensive proposition. This required an array of power supplies and throttles (one for each train), toggle switches and wires. The more complex and detailed your operating scheme, the more complex the wiring. All helper districts and yards had to be carefully preplanned. Adding a single operator and train to your schedule might require rewiring most of the layout! There had to be a better way!

Now that you've erased you-know-what from your mind, let's take a look at how a bunch of computers, printers, scanners, servers, modems, and other devices are hooked together to form a computer network. If you work or study in an environment where computers, printers and other devices are connected together in a network, you are well on your way to understanding Digital Command Control. The Digital in Digital Command Control means just that. It works like a computer, and can be easily connected to a computer as well.

We have a basic computer in front of us. We type on the keyboard to enter instructions. We move the mouse and right-click, left-click or middle-click to enter more instructions. We get a visual display of what we are doing on our monitor. In regards to DCC, we'll call this computer a throttle.

Not all computers have the same capabilities. Your computer might have a modem, a scanner, a joystick, a printer. In an office environment, you might have a server that has more memory, larger hard drive, and more powerful software. A server computer in the DCC world comes in the form of a command station.

Let's connect your computer and my computer and our friend's computer together in a "local area network" or LAN. This way, we can share resources. Instead of a whole bunch of small inkjet printers, everyone can use a faster laser printer hooked into our network. We can even add a colour printer to the network, a scanner, a fax machine, a modem, or many other different types of devices to our network. *This is the power of a networked computer system.*

We've probably over-simplified the situation - but you get the picture? If you don't here's a picture for you. 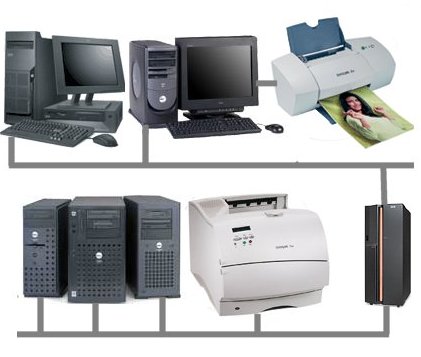 What does Digital Command Control have to do with Computers?

Most of us are familiar with computers, so let's apply some of this computer terminology to model railroading.

I have a computer in my hand (we call it a throttle). On this hand-held computer (throttle), there's a keyboard, mouse, and monitor (knobs, buttons and display). The hand-held throttle is connected to network, (Digitrax calls it theirs LocoNet; Lenz calls it XpressNet).

If I want to send a message (stop, go, increase speed, reverse direction, turn lights off, ring bell, blow horn) from my computer via the network (i.e. LocoNet) to your computer, I turn a knob or push a button on my computer (the throttle). This sends a message through the network to a more powerful computer (a command station - more on this later). This powerful central computer (the command station) processes and transfers my message. Much like today's corporate networks, the command station decides if the message you sent needs to be transmitted to another computer, to a printer, or maybe some other external device such as a modem, via the various connections (ports) available.

That's all Digital Command Control is - a networked computer system used to operate and control model trains! Some of these computers are called throttles, some are called Command Stations/Boosters, and others are called locomotives. We can add other computers if we want: More throttles, locomotives with whistles, horns, and bells, switch machine controls, signal systems, etc., by simply plugging them in. Not all of these "computers" have the same capabilities. Some of them might even be personal computers running one of many computer applications.

The only difference between a computer network and a Digital Command Control network are the tracks and the power on those tracks. Because we need power to run the locomotives, the power in the track is typically 16 Volts at 5 Amps for HO scale. The electricity supplied to the track is a digital signal. We won't go into the details at this point - perhaps later on.

The NMRA Conformance Warrant is given only to products that conform to NMRA Standards. With NMRA conformance, Digital Command Control components from numerous sources will always function with any conforming DCC command station. Many DCC Manufacturers do not display the NMRA conformance warrant, yet that does not mean the product does not meet NMRA DCC Standards. The NMRA DCC logo assures the purchaser that the product is compatible. The NMRA requires any DCC product which lacks certain features must disclose that on the packaging and in the instructions, so the consumer can make an educated decision when purchasing DCC components.

The National Model Railroad Association (NMRA) is an organization founded for the betterment of the model railroad hobby. The main reason for the formation of the NMRA was to standardize things like track and gauge, for the purpose of inter-operability. The NMRA created the Digital Command Control standard for the sole purpose of standardizing command control systems. This work began in the 1980s with the formation of a Command Control working group, which evolved into the DCC Working Group. The purpose was to create a common standard for command control, which would enhance operations and the hobby in general. Without a command control standard backed by a strong, recognized organization, command control was destined to remain an expensive niche in model railroading. For more on command control see the DCC History page.

The NMRA membership is made up of people like you, working for the betterment of the hobby.

The NMRA makes every attempt to standardize the industry by publishing DCC Standards and Recommended Practices (RPs) for manufacturers and consumers. Their trademarked symbols notify consumers the product(s) they are using (or may wish to purchase) meet the compliance standards set by the NMRA.

Products that follow the DCC Standards and Recommended Practices can display the NMRA's DCC logo. To get an NMRA conformance warrant products are tested by the NMRA. There is some controversy about the conformance warrant and its usefulness. Some manufacturers had products tested and awarded the conformance warrant early in the history of DCC, but have decided that it is no longer necessary, though they still abide by the standards and participate in the DCC Working Group. Lack of the Conformance Warrant "football" seal is not necessarily an indication of a poor quality or incompatible product. If it does not conform to the DCC Standards, it cannot carry the DCC brand on the package.

The backwards compatibility features built into the standard allows those modelers not interested in DCC to continue to use existing DC standards without affecting the operation of their equipment.

We're going to assume that you fully understand the information above. If not, re-read it again.