Summary: A Programming Track aids in programming multifunction decoders. They can be an independent segment, or a spur on your layout.

Short Definition
A track set aside for programming locomotives using Service Mode. It may or may not be part of the layout.

A programming track is used to safely program Multifunction Decoders using Service Mode. It is easier to have a portion of your layout track to double as a programming track. This minimizes handling of finely detailed locos on your layout and allows you to simply drive your loco to the programming section, and read/change values of the decoder. It is best to have your programming track near the programming device (Command Station, SPROG, or Computer). Every layout should have a program track. It does not have to be on the layout, it could be a test track at the workbench. 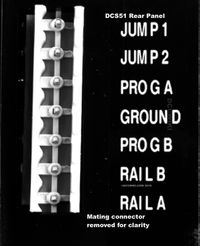 The PROGRAM output on a booster must never be connected to the TRACK output!

With the solution provided below, the worst that will happen is that the train will stop once the last power pickup enters the isolation area. Some multifunction decoders may creep forward during programming as a method of acknowledging the command was accepted, which can be an issue when using a method like DecoderPro to write multiple CVs, particularly when programming a sound decoder.

Remember, some locomotives creep forward during programming, so the longer the track the better. Modern decoders have an acknowledgement feature built in. A program such as DecoderPro will send a new CV value to the multifunction decoder. If it works, the decoder will acknowledge this by briefly energizing the motor. This sudden draw in current can be detected by the command station. DecoderPro can by the same method read the CV values. It just sends every possible value sequentially until the motor is energized. Thus, when programming or reading a large number of values the locomotive can creep forward quite a distance. Keep that in mind when planning the length of your programming track

Many modellers are of the opinion that two DPDT switches can be used. They are not incorrect.

Inevitably a mistake will occur or a switch will be changed accidentally, damaging the command station/booster. A 4PDT prevents accidental misconfiguration of the program track by only offering two possible states. Using two DPDT switches offers 4 possibilities making misconfiguration very easy to accomplish.

A Note Regarding Switches

The best choice of a 4PDT switch for your program track is a Center-Off version. This ensures that one circuit is completely disconnected prior to the new connection being established.

Switches are available as "make before break" and "break before make". For this application, a "break before make" is essential, and a center-off version is the easiest way to make sure the switch breaks before making a connection. This avoids the possibility of momentary connecting the booster output to the programming track output terminals. 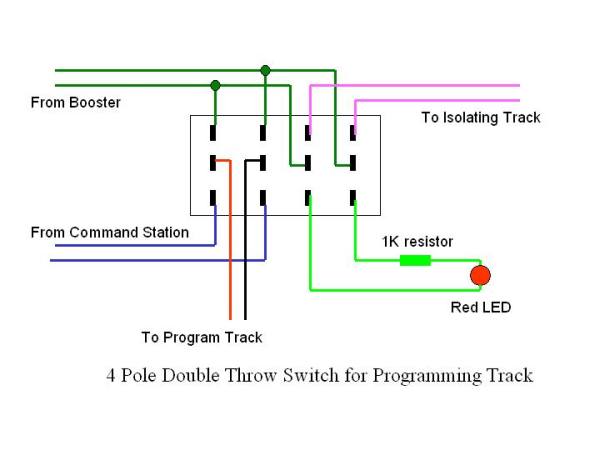 Booster
Normal output to the track from the booster. In this mode, the program track and isolating section is connected directly to the booster output and function as normal trackage.
Command Station
Output from the Command Station or Booster's dedicated Programming Track outputs, if equipped. If your command station lacks these connections, consult the manual for the proper wiring of a program track, which may require a series resistor to limit the current in this mode.

The LED can be a signal near the track, or mounted between the rails, or on the front of the facia, or both. Note: The LED is optional and may or may not work depending on the DCC system used. Some DCC systems will shutdown the main line when programming is active leaving the LED unpowered.

Note Regarding the LED
It would be advisable to connect another general purpose diode in series with the LED to protect the LED from being reverse biased when the track signal makes the Cathode more positive than the Anode. LEDs are not designed for high reverse voltages.

A Programming Track Booster serves to make programming more reliable, and may also incorporate short circuit protection and basic diagnotics. It may also provide feedback to aid in troubleshooting a problematic decoder.

The NCE Auto-SW detects the packets indicating program mode, and switches its output from track power to program track. It has one input from a booster, such NCE's Power Cab, and two outputs.

The PowerPax DCC Programming Booster by DCC Specialties is an older design and may not work with all decoders and command stations. There are timing differences which may be an issue as well. Soundtraxx's PTB-100 was designed when programming sound decoders became an issue, and addresses the timing problems.

Part 1 - Of wiring a dedicated program track for an NCE Powercab with an SB5 smart booster.