Summary: A cost-effective way to add automatic reverse control. This device reverses the DCC signal, not the locomotive within the block.

Not to be confused with the AR-1 and AR-2 by Circuitron, which are for analog DC applications. 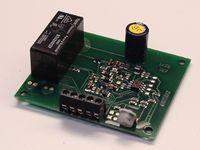 The Digitrax AR1 is a reversing module. It is used to automatically reverse the rail phasing on trackwork such as wyes, turntables, balloon tracks, or reverse loops. The AR1 uses a mechanical relay to accomplish this task, with the contacts wired as a DPDT (double pole, double throw) switch.

The Digital Command Control signal on the track does not have polarity. The signal has two phases: On or Off. A short circuit occurs when Rail A connects to Rail B, as the current can easily flow from the energized rail (ON, or logical one) to the grounded one (OFF, logical zero). The signal on the rails flips from on to off rapidly, with Rail A always being in the opposite state of Rail B.

Example of a Reverse Loop

When the track folds back on itself, rail A will meet rail B at the turnout. Both rails are gapped at points entering and exiting the loop. The reversing module supplies the DCC signal to the loop, taken from the track before the turnout. When the locomotives wheels bridge the gap, a short occurs when the DCC signal's phase across the gap (Rail A1 does not match Rail A2) is incorrect. The AR1 quickly inverts the phase on that section of track to match that of the track section the locomotive is entering.

The reverse section must be powered exclusively by the AR1 for prpoer operation. No other power sources may be connected to the section.

For proper operation the command station must be set for slower response to a short circuit, otherwise it will trip before the AR1 has a chance to act.

The DCS100 command station and DB150 booster both use OpSw18 to control this behavior. By setting it to "closed' the reaction time will be increased to a half second (500mS).

For other boosters and command stations refer to your manuals.

The AR1 can be adjusted for trip currents from 8A to 250mA, allowing the sensitivity to be adjusted if needed.

The adjustment is done with a screw driver. Turning the adjusting screw clockwise increases, counterclockwise decreases trip current. The screw only has about a half turn in travel, so do not force it.