Summary: A list of settings to customize how fast or slow a locomotive should run at a given throttle speed.

Many multifunction decoders have a built-in curve (Speed Table) that is a standard setting of how fast or slow the vehicle should run at a given throttle speed. The speed curve between manufacturers can differ. Also, you will need to take into account different models and brands of locomotives. However, there are a few ways to alter that speed curve. Some decoder brands even allow you to program many different speed curves into the decoder, and allow you to select which one to use on the fly.

To handle the task for limiting speed, we use a speed table to set the maximum speed. That is, you specify how fast (or slow) each speed step will be - hence a curve.

Even on identical models some tuning may be required, as slight differences between motors and gear sets will exist.

Speed curves are only available on multifunction decoderss with 28 and 128 speed steps. Not all decoders include CVs 2, 5 and 6 required for trimming speeds either.

Your throttle only has a limited number of 'notches', or speed steps. You can have 14, 28, or 128 different speed steps. At the lowest ones, the loco will probably not move at all. At the highest ones, your loco may move too quickly. The speed table allows you to adjust the 'notches' to include only the realistic range of speeds, allowing for finer control.

It also allows you to define how the locomotive will accelerate, and at what rate.

There are two ways to implement a speed table.

In most cases, the default or built-in speed curve work just fine. With multifunction decoder features such as V-Start, V-Mid, and V-Max, it's possible to match speeds of dissimilar locomotives. But, if you cannot attain the speed curve desired by modifying the built-in speed curve(s), you can always use the user-loadable speed table to configure the exact curve you need.

These would be the equivalent of off-idle, part throttle, and wide-open throttle. These CVs set the minimum starting voltage, the mid-range voltage, and the maximum voltage which will be applied to the motor. These are used to tailor throttle response. Much the same as when you move your car's gear shift to Drive, it doesn't stall or surge when you press the accelerator, it runs efficiently at highway speed, and delivers maximum fuel when you floor it without surging or stalling.

If the momentum values are set the formula used by the decoder is CV value X 0.896/Speed Steps

For fine tuning, you can use CVs 66 and 95 for forward and reverse trims. CV65 is for Kick Start, to help the loco get started on speed step 1 - used to get around stiction.

With some multifunction decoders, the user-loadable speed table can only be used in the 14 – or 28 – speed-step modes. Advanced decoders can expand the speed table for use with the 128-speed-step. It does this by by stretching the 28 CVs, or interpolating, into 128 virtual CVs and computing the in-between points.

You don't have to use the user-loadable speed table. The default setting will typical function good enough to get you started and allow you to run your trains.

Decoder Pro allows access to the speed tables, and any options the decoder may offer.

There are a number of videos and tutorials on the web demonstrating speed matching using the speed tables in the multifunction decoders.

Digitrax multifunction decoders provide the user-loadable speed table in the 28 and 128-speed-step modes. They are supposed to support kick start and forward/reverse loco trim, but these features may not work on some of their current decoders.

ESU has an Autotune feature on some multifunction decoderss. This feature tunes the BEMF CVs automatically when run. This should be done before attempting speed matching. 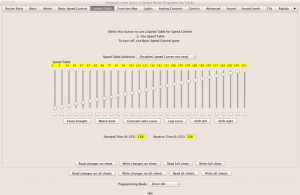 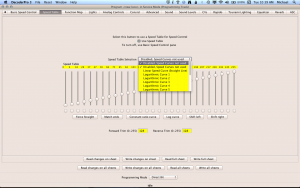 This procedure is intended to create a speed table for a 28-step throttle where each throttle step is approximately equal to the locomotive’s scale speed in mph. This type of speed table is useful for a switching prototype and was specifically created for a model of the Alco S-2 locomotives used by the State Belt Railroad of California, a switching railroad that operated on the San Francisco waterfront between 1898 and 1993. In that service the prototype locomotive was typically operated between about 4 and 15 MPH for switching and urban street operation. The basic process used to create this speed table can be adapted to other applications. 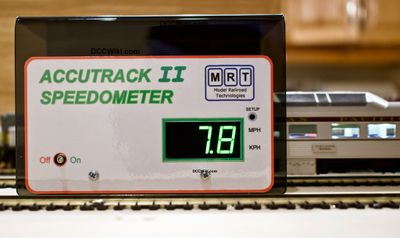 The creation of a speed table is very specific to a particular locomotive and its decoder and is therefore affected by various tuning parameters that can affect motor operation. Before attempting to create the speed table, do all necessary tuning both mechanically and with CV’s relating to motor operation. This is particularly important with respect to back EMF related CV’s. Once the locomotive is running to your satisfaction proceed with the creation of the speed table. This specific speed table was created for a Arnold/Rapido N scale S-2 model. The model was modified with North West Short Line 2679-6 geared wheelset. A Lenz Silver Mini DCC multifunction decoders was installed.

AS this is just an example, there are no numbers or calculations presented. It is just an explanation of how to go about fine tuning a speed table manually.

It is useful to know what the minimum scale speed the locomotive is capable of starting at during DC operation. In the case of the above locomotive, it was capable of maintaining a minimum speed (DC) of about 6 scale MPH. It later turned out that with DCC and the back EMF parameters tuned, it could maintain a scale speed of 1.5 MPH. It found that the linear-voltage performance followed a different curve below 6 MPH than it did above 6 MPH, presumably related to the DC capability and the operation of back emf. It will be explained later how to deal with that behavior.

Take speed data at throttle settings over the range of operation of interest. In this case data was taken at throttle settings of 1-6, 9, 14, 18, and 24. The data taken was the time in seconds required to travel 12” both in forward and reverse with the two figures added together to average the speeds. Typically, speed will be slightly different between the two directions. These throttle settings produced a range of speeds from 1.5 MPH to 31.2 MPH. Because the operating speed range was intended to be from 0-28 MPH, this is all the data that was required.

The digital values were plotted against the scale speed and the least squares fit established. It was observed that there is a kink in the data at about 6 MPH. This was dealt with by using two different linear data fits, one for below 6 MPH and one for above 6 MPH. Microsoft Excel was used for the plotting and least squares data fits.

The formulas for the two lines are used to establish the appropriate CV values for the speed table as follows:

The equation for a line takes the form: Y = MX + B

In this case X is the digital voltage step value and Y is the scale speed in MPH. To create the speed table, we need to be able to calculate voltage step digital values from desired speeds for each throttle step.

(Y – B) / M = CV setting, where Y = Speed MPH, and M and B are selected from the appropriate speed ranges as noted earlier. Note that this formula will calculate a value that must be rounded to the nearest whole number. The formula calculates 0 for the first table CV value so the first value was set as 1. Neither formula calculates a sensible value for 6 MPH because of the kink, so an intermediate value was chosen. A set of values were calculated and entered into CV 67-94 creating the speed table.

The speed table was tested using the intended 28 step throttle and delivered acceptable performance for the application of +16%/-10%. These errors were less than 1 MPH in most cases.

Some improvement may be possible by manually adjusting the speed table or recalculating CV values, taking into account an error function. However, it should be kept in mind that with the use of relatively coarse digital values there is a practical limit of accuracy in any speed table that is on the order of a 5% average error. The error limit at low speeds is even greater due to limitations of the motor.