Summary: Multiple Unit Consisting allows the modeler to faithfully replicate prototype operations by creating a consist of several locomotives to haul a train. This has the effect of creating one large higher horsepower locomotive controlled by one engineer. With Digital Command Control, a Multiple Unit Consist can be easily created and operated from one throttle.

Note: Before creating a consist, be sure to match up your loco speeds. 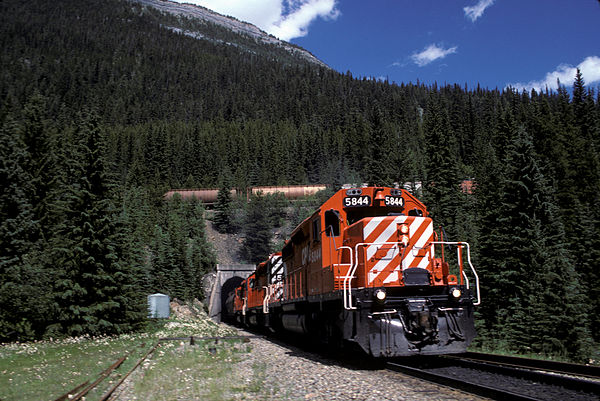 There are three ways of creating a consist with Digital Command Control. Each consisting method has its advantages and disadvantages. Not all methods are supported by all systems - check your documentation if you aren't sure what you can do with your equipment!

Another method which is beginning to appear is Throttle Based Consisting. This relies on the throttle creating and managing the consist, instead of the command station. Usually found on third party wireless throttles.

This is the simplest method of creating a consist. Simply program all the locomotives you want to run together with the same address. This can be done with a Primary or Extended address. The locomotives must all be facing the same direction for this to work, as direction of travel is determined by their orientation. If it is planned to operate locomotives as a permanent consist, such as an A-B-A set, the NDOT must be set accordingly.

If the consists were created with a Primary address (1-127), there may be issues operating as a consist on another layout. There will be conflicts if the primary address is also used by another locomotive which is not part of the consist.

Creating a Decoder Based Consist

Remember, if the consist is separated, all the locomotives will still respond to that address unless reprogrammed to new addresses.

If the locomotives are taken to another layout the consist will still function, as it is stored onboard the locomotives. Correct orientation and sequence are important.

The consist will use a single address in the command station. It is limited to a Primary Address. There may be address conflicts when operating as a consist on another layout.

Advanced Consisting is done by using ops mode programming to change configuration variable 19 to set the address and normal direction of movement. This also requires reprogramming the decoder to change the consist, but some systems do this transparently to the user. Some decoders will allow you to specify what functions will respond to commands addressed at the consist address. Creating and breaking the consist are handled by the command station using specific commands sent to the decoders.

This method was given the name Advanced Consisting to reflect that its possibilities were much more advanced than that of Basic Consisting, as the Primary or Extended addresses were not altered, and individual control of each locomotive in the consist is possible. This implementation of consisting was considered to be a better choice than relying on the command station to create and manage consists.

The command station sees the consist as a single locomotive:

While part of an Advanced Consist, a locomotive cannot respond to function commands sent to the consist address[8]. There are two optional CVs, 21 and 22, which can enhance consist operations in this mode. Acceleration and deceleration also can be further adjusted using CVs 23 and 24, which are optional.

For control of functions, CV21 and 22 are used. CV 21 is responsible for F1 to F8. CV 22 controls lighting effects (FL) and functions F9-F12. Acceleration (CV 23]]) and Deceleration (CV 24) can be fine-tuned by adding their value to those in CVs 3 and 4. CV23 and 24 can contain positive or negative values. These CVs must be programmed prior to the locomotive being using as part of a consist. Most DCC systems do not do this automatically, the user is required to manually program these CVs.

Extended Packet Format is another term for Advanced Consisting, where consist information is stored in each decoder. Locomotives can be added or removed in any orientation. All locomotives in the consist must be equipped with decoders supporting this feature, which allows a consist that is "transportable" from one DCC layout to another, but ensure the locos are on the track in the same order and orientation when they were programmed to avoid unexpected results. Most decoders today should be compatible with the Extended Packet Format.

CV 19 is used to consist the locomotives by writing a common address for the consist.

CV 19 can be altered in one of three ways:

The command station can use specific Consist Control commands to configure the decoder. See Digital Packet article for more detail.

If a locomotive was part of an advanced consist, clearing CV19 (by writing a value of zero to it) removes it from the consist.[9]

Digitrax calls their implementation of command station consisting UniVersal Consisting (Yes, with a capital "V" in the middle).

Consists may be stacked, making up consists within consists. Locomotive functions can still be individually controlled without affecting other locomotives in the consist. The command station sees the consist as individual locomotives, sending each locomotive its own speed and direction commands.

Other Implementations of Universal Consisting

The following systems allow any address can be used, with the exception of Address 00.

Throttle Based Consisting is a new method often found with third party wireless throttles. These throttles will connect to the throttle network using a WiFi connection.

In this instance, Command Station Consisting such as Digitrax's UniVersal Consists are handled within the wireless throttle. This method was chosen due to the proprietary nature of LocoNet. Design of the throttle's software allows the throttle to be used on multiple throttle networks without the requirement of having to make configuration changes to the throttle any time it is connected to a new network. In addition, it permits the throttle's software designers to side step multiple protocols and network languages to make this feature work, including licencing issues surrounding proprietary technologies. 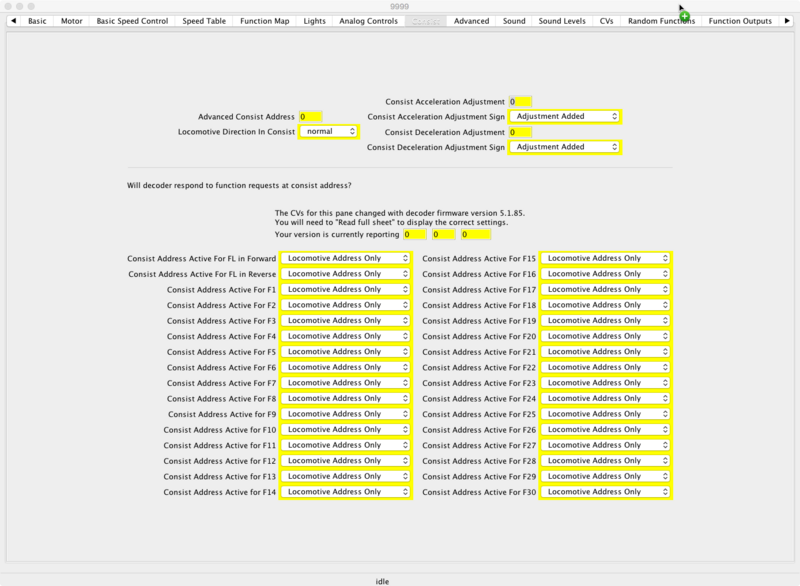 The greatest advantage of the command station consists as implemented by Digitrax is its flexibility. It is easy to add (and delete) locomotives or groups of locomotives to a consist, making it easy to assemble long trains with multiple mid-train helpers (common on N-Trak layouts) or add/remove helpers to get a long train up a steep grade. It is important to remember though that while it is still using one slot per locomotive with this method - and the most capable system from Digitrax has 120[11][12] slots available, command station consisting is not suitable to use on large layouts where you are expecting more than 20 or more operators at a time.

The TOP locomotive is the address controlled by the righthand throttle on an Advanced Throttle (DT200/300/400/500/602). When this address is Dispatched, the entire consist is Dispatched.

The advantage of Advanced Consisting as implemented by NCE is its flexibility. NCE utilizes a hybrid of Advanced and Command Station consisting, where the consist address is in the multifunction decoder's CV19, and the command station maintains a table of aliases for managing the consists. It is very strightfoward to add and delete locomotives or groups of locomotives to a consist (nesting), making it effortless to assemble long trains with multiple mid-train helpers or adding helpers to assist a long train on a steep grade.

Depending on the NCE system chosen, you can control from 16 to 127 unique advanced consists. There is no limitation on the number of engines within a given advanced consist. The NCE command station has the ability to control a given consist using the lead locomotive's address regardless if it is a long or short address.

Specifically, if the locomotive has a long address, that long address is used to control the consist (an Alias). In other words, use the engine number like you would normally if the engine was not part of a consist. Unique to NCE is the ability to dynamically redefine the leading locomotive consist without turning the engines around. Select the last engine of the existing consist and instantly it becomes the lead engine of the same consist. Included in this change is both train direction and function control (headlight and sounds). The advantage becomes obvious when running a train down a stub branch which has no turning facilities. It goes forward down the stub branch line to the end and leaves going forward in the opposite direction. This action follows the prototype, where the crew would relocate to the front engine.

A nested consist is constructed using Command Station consisting to manage multiple Advanced Consists and/or a mix of individual locomotives and an advanced consist. A maximum of four pre-defined advanced consists may be combined into a temporary single consist. Hence, you can temporarily add a helper consist to a train with a lead consist, climb the grade using one throttle, subsequently break the nest consist into their original individual consists. Afterwards, the helper consist goes down the hill to await the next train.

NCE also has a consist browser which allows management of all of the advanced consists by:

The goal: With the same throttle setting, each locomotive travels at the same speed (or the same distance at the same time). Think of method as distance/time matching rather than speed matching.