Summary: Speed steps are the divisions between Stop and Maximum Speed. The command station receives a throttle input, computes a value based on the number of speed steps, and transmits that value to the track. Multifunction decoders can use 28 or 128 distinct values, older decoders may only accept 14 values. Larger values result in finer control of the vehicle's speed.

Speed steps can be thought of as how many notches there are between idle (stopped) and full speed. That is, as you turn the knob on your DCC throttle, how much control can you achieve. For example, if you had 4 speed steps (stopped, slow, medium, and full), you wouldn't have much fine control. In our example, you would turn the knob and the train would lurch to its slowest speed. The next step up, it lurches again to its medium speed, and then to full speed. This isn't very realistic, and doesn't allow for very fine control. Think of your lawnmower's throttle compared to your car. 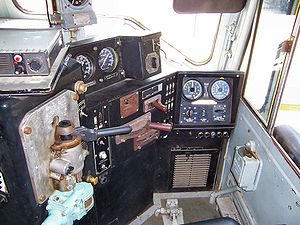 Steam is a little different, because the engineer controls not only the throttle valve in the boiler, but also the valve action at the cylinders. It would be the same as being able to control the valve lift and duration in your car, to optimize the engine's operation under different loads and conditions. Opening the throttle only admits steam into the steam chest, adjusting the cutoff (value action) controls the amount and duration of steam admitted to the cylinder. Adjustments are always being made to maintain speed or power while economizing on steam (and fuel) consumption by maximizing utilization of the energy released by the expanding steam. Even when the engine is drifting downhill, some steam is still admitted to the cylinders to cool them and provide lubrication. The reverser, which controls the valve motion, can also shift the valves to provide forward or reverse operation.

While steam and diesels have different approaches to the same issue, the number of speed steps determines the level of control afforded, just as the engineer has various controls available to him which determine how the locomotive will react. The engineer does not want to melt the traction motors when starting a heavy train.

With DCC, there are three speed step choices: 14, 28, and 128. Lenz also had 27 and 55 speed steps that were a simulation of some kind - it is not covered in the NMRA Standards and RPs. It's unclear if they still offer these odd speed steps now that they offer 128 speed steps.

The command station will calculate a value which is transmitted to the multifunction decoder within a vehicle. With the 14-step mode in use, each increment of the throttle is equal to 1/14th, or approximately 7% of full throttle.

Some multifunction decoders may internally use 1024, 2048 or even 4096 speed steps, using the CVs which control acceleration/deceleration to calculate the rate at which the internal steps are incremented/decremented for smoother motor control.

The 14-speed step mode has been deprecated and is now optional.

The 14-speed step mode has been retained for backwards compatibility with older multifunction decoders. It requires one byte to transmit, within that byte is the status of the lights and direction of travel. It shares the same space with the 28-speed step mode. If a decoder which supports 14 speed step mode is controlled using 28 speed step packets, the headlight will toggle on and off for each throttle change. In this scenario, the bit that controls the headlight is now the Least Significant Bit of the speed value.

See the table below. Bit 5 is defined as C.

The 28 speed steps also fit within one byte. This mode is required by the NMRA DCC Standards. This is controlled by CV29, Bit 2, FL Location, which defaults to a value of 1. If that bit is set to Zero the 14 Speed Step mode is enabled, the headlight controlled by bit 5 of the speed instruction. In this instance, the 14 speed step mode data occupies the same instruction space as the 28-step mode.

When a multifunction decoder which supports 28–step mode only (not 28/128) receives a 128–step speed command, loss of control occurs. The command station must be set for the correct speed step mode for that decoder. See the instruction manual for your system.

This table shows the speed step structure for 28 step mode. Note how the bit C alternates between On and Off. This causes the headlight to switch state every time a change in throttle position is made when the command station is transmitting 28 steps to a 14-step decoder.

This mode requires two bytes of data, unlike the other modes which use one byte. The first byte contains the Advanced Operation Command and the sub instruction for 128 step mode, the other contains the direction and speed value. [3]

The optional NMRA 128 speed step mode is available for both multifunction decoders and command stations which support it. Both the decoder and the command station controlling it must support this feature.

The term "128 speed steps" is a bit of a misnomer. It should be called 126 speed step mode for consistency, much like the 14 and 28 speed steps are accurately called.

You would normally expect the maximum to be 127 since that is the largest value that can be encoded in the 7-bit binary field transmitted in a 128-step speed control packet. The lowest speed step (step 0) is Stop. The missing speed step (Step 1) means Emergency Stop (i.e. Stop NOW and ignore deceleration settings). So, your command station's speed steps 1 to 126 actually correspond to 2 to 127 as encoded in the DCC packet. There are 254 valid steps available, half in either direction. Bit 7 controls direction.

The NMRA DCC Standards structure the baseline packet as follows:

The Extended Packet Format [6] is used for 128 speed steps:

In this example the instruction Bytes are formatted as follows:

It is possible to accidentally alter the speed step parameter in the command station. It may be a global change, or specific to one locomotive address. Should that happen, consult the manual for your system on how to set the default number of speed steps. Digitrax uses the term Status Editing for parameters related to a specific slot in the command station. Other manufacturers may have similar terms.

NCE's Power Cab defaults to 28 speed steps, pressing a button on the cab/throttle changes that mode to 128 for all locomotives. Boosters added later to a Power Cab may store the mode used and restore those settings during power up. The Power Pro can store that setting in the command station memory for each locomotive, for up to 512 locomotive addresses.

Sending 28 step commands to a decoder which can only accept 14 results in the following:

If a 28-step decoder receives packets in 14 step mode, the maximum speed will be limited to half. Turning the headlight on or off may also have a definite effect on the speed.

For compatibility reasons, some decoders may not use the address byte to control the headlight operation. The headlight is controlled by a bit in the instruction byte instead, which will change with the throttle settings. This bit will alternate between On and Off as the throttle changes.

MRH DCC columnist Bruce Petrarca shows how a loco headlight acts strangely when you have the speed step setting wrong in CV29.

The 128-speed step mode is OPTIONAL. Most decoders support it, and will seamlessly switch between 28 and 128 step modes.

If a multifunction decoder does not support or understand the 128-step mode, loss of control will result. The command station needs to change to 14 or 28 speed step mode for that decoder, to format the digital packets correctly. A packet with 128 speed steps will have extra data which can cause control issues for a 28 step only decoder.

Almost all systems now support 14, 28, and 128 speed steps - simultaneously. But don't assume, check the DCC Systems comparison guide for more information. Some systems are still limited to 14 or 28 speed steps, not both at the same time. A few manufacturers still make decoders that operate only in 28 speed step mode - for those, you may find it necessary to status edit the slot this locomotive uses in the command station.

Which Mode is Better?

There have been discussions over the years as to whether 128 speed steps are necessary or not. The nay-sayers would always say, "The real ones don't have 128 speed steps". Just keep in mind, these are not real trains, these are models. And like everything that gets scaled, all things can't be scaled exactly the same and still appear correct. With model railroad control, the smaller the scale the more speed steps you need to have good control. You also lack an exact replica of the control systems found on the prototypes.

As a general rule, the smaller the scale, the finer the speed control needed to achieve realistic switching and other operations. While 28 speed steps may be OK for G scale, 128 is more realistic for HO and N scales. Of course, if all you want to do is turn your trains on and watch them go, any amount of speed steps is fine.