Throttles for Lenz Digital Plus

Lenz offers the LH100 (Dispatcher Throttle) and the LH90 (Engineer Throttle). The former is entirely push button with a full numeric key pad. It generally makes operating multiple locomotives relatively easy. The latter is a dial control with a limited function key pad. While all functions can be accessed from the latter, the LH100 tends to be more intuitive. The LH90 tends to be a better single locomotive controller, although this would vary from user to user. Those persons used to dial throttles (such as most standard DC models) will generally find the LH90 preferable, particularly if only lights, sounds and direction are to be controlled by the operator. If more sophisticated function programming has been performed on the locomotive or auxiliary decoder, the LH100 might be preferred.

Both of these controllers are Tethered (i.e., wired). They use XPressNet, which is compatible other Lenz OEM DCC systems such as Atlas and Roco. Lenz has a unique wireless system which uses a device called XPA which permits a wireless phone handset to operate as a throttle, and it would operate similarly to the LH100 because of its full numeric key pad.

This is the basic throttle, included with the Set 01. 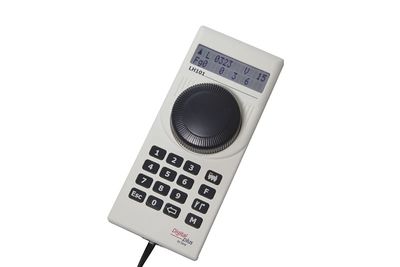 A radio version is in development.

With the ALR900 Wireless Receiver, CVP Products' wireless throttles can be used with any Lenz DCC system. The ALR900 plugs into the ExpressNET throttle.

Introduction to the LH101 Throttle