Summary: A Wi-Fi Throttle usually refers to a throttle app/program on a mobile device. These applications exist for iOS, Android, and Windows. Normally the device is a smart phone, but can also be a tablet. There are a number of ways to have wireless throttles using Wi-Fi technology, some are software-based for a smartphone, others are complete handheld throttles. 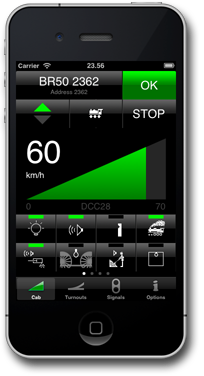 The Universal Wi–Fi Throttle from TCS is a fully featured handheld throttle. For more details, see their web page.

TCS indicates it is compatible with: 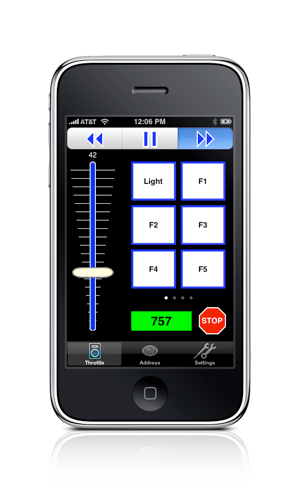 The Wi-Fi device which bridges between the wireless devices and the wired network is called a Station. It can be a free-standing device or built into a computer. To match the throttle app running on the mobile device, there are various ways to interface to a command station:

The easiest way to use a Wi–Fi Device, such as a smartphone or tablet, is JMRI. For more information on the Java Model Railroad Interface, visit the JMRI page or their website at Sourceforge. JMRI is free software, so this is a low-cost way to enjoy a wireless throttle.

You can download software for your smartphone from the internet. Some have a basic version with the basic features at no cost, or you may have to purchase it. A full version with all manner of features will cost you, but at a substantial savings over buying a wireless throttle for your DCC system.

Software is available for both Apple's iOS and Google's Android powered devices. Google will help you get to the respective online stores where the software can be downloaded.

You will need the following:

Once you have installed JMRI and got it working, select the WiThrottle option under Tools/Throttles

Start the software on the device. At some point it should connect, you may have to do it manually the first time. There should be an option to discover networks, select yours and it should connect.

The window JMRI opens should display all connected devices as they establish a connection with the WiThrottle server.

The first command station with all imaginable connectors combined in one device. Clear LED displays and integrated USB, LAN and Wi–Fi

Z21 is a system from Roco and Fleischmann which enables wireless operation of your railroad.

With the Z21 Digital System, model railway control is as easy and exciting as never before: locomotives, switches and digital components of Roco and Fleischmann can be controlled easily and conveniently from your smartphone or tablet PC – ensuring maximum driving fun from the rst moment! The Z21 Digital System is made up of three modules:

The system includes a WLAN Router.

It also has connections for a "Sniffer Bus", programming track and your main track bus.

Supported by an app for Apple iOS and Android devices. See the website for more details.

These devices function as both a Wi–Fi Station and a throttle network interface. This is not the same as a wireless bridge, which is used to extend a wired or wireless network.

Digitrax offers their own bridge, the LocoNet Wireless Interface, or LNWI.

The LNWI supports 4 throttles, LocoNet supports up to 8 LNWIs, for 32 throttles in total.

It is compatible with WiThrottle and Engine Driver apps via the Hoffman WiThrottle Protocol.

It is directly connected to LocoNet, with Plug and Play installation. If offers a number of configuration and security options. For more details see the Digitrax LNWI page. It cannot be used with a LAN (Local Area Network), the only network it will connect to is LocoNet.

Digitrax has added support for the TCS Wireless Throttles. A firmware update is available to update the LNWI to support these throttles.

NCE CAB Bus Wi-Fi Interface allows you to use WiThrottle and Engine Driver apps with the NCE Cab Bus. The device functions as a WiThrottle server using the Hoffman WiThrottle protocol. It translates the WiThrottle commands to the NCE Cab Bus protocol. Supports up to 4 throttles. Cab Bus Compatible, works with any NCE Command Station such as the Power Pro, Smart Booster and Power Cab. Installation of JMRI is not required.

Two RJ–12 sockets provided to connect to the Cab Bus

Replaces the circuit board in your NCE Power Cab Panel or Universal Throttle Panel to provide Wi-Fi Control using popular apps such as WiThrottle, Engine Driver, or the TCS UWT-100 Universal Wi-Fi Throttle. Works with NCE Power Pro, Smart Booster and Power Cab. The WFD-31 does not allow CV Programming.

The difference between the two WiFiTrax interfaces is that this product includes a wired throttle interface to the Cab Bus. It also has two additional RJ–12 sockets, one for connection the the Cab Bus, one for the Power Cab, and others can be used for throttles.

Most of these products will work with iOS devices such as the iPhone/iPod Touch, or an iPad, with the exception of Engine Driver (Android).