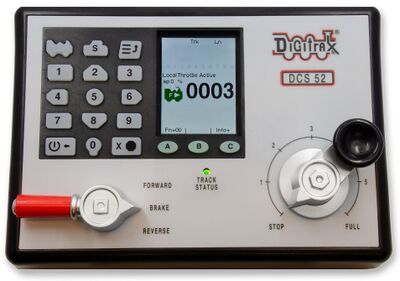 The Digitrax Zephyr Express is the latest version of the Zephyr starter set line up. Released in January 2019. Despite being an entry level system, it is expandable via LocoNet to create a comprehensive Digital Command Control system. The Zephyr Express features the new Digitrax DCS 52, which contains an integrated command station/booster.

Like the previous Zephyrs, one or two DC power packs can be used as throttles to control up to 2 locomotives via the Jump Ports.

The Zephyr Express features Address 00 for control of a non-decoder equipped locomotive.

A video about the Digitrax Zephyr Express
Retrieved from "https://dccwiki.com/w/index.php?title=Digitrax_Zephyr_Express&oldid=18129"
Categories:
Last Edited: 23 May 2020.