Summary: When selecting a Basic or Advanced Digital Command Control system, you need to ask yourself a few questions. It is a big investment and you will be using it for a number of years, so consider what you need now and will possibly need in the future. Choosing a low-cost system may not be the best investment you will make in DCC, so consider all your options.

Start by making a list to determine your needs and wants. Here's an example to get started with: 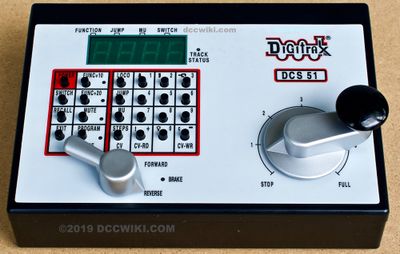 How do you relate to computers? Do they like you, or seem to be out to get you? Does your VCR permanently display 12:00?

These are important questions. If you are very technically literate, that is an asset. If you are a technophobe whose very touch upsets electronic systems, then a full featured, top of the line, sophisticated DCC System may not be your best choice. Don't let that frighten you. While DCC may look complex, there are many resources on the Internet which can help you sort out any issues you might encounter.

It also pays to look at some of the European DCC brands, as some of their systems offer features not found on North American DCC brands, such as a Graphical User Interface and automation capabilities.

You now have two choices: a Basic Digital Command Control system or a Starter Set. What is the difference? 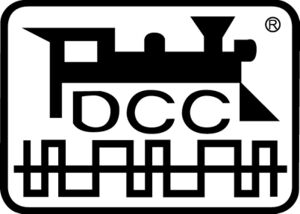 These are basic Digital Command Control systems offered by companies such as Atlas, Bachmann and others. These systems are built by an OEM to the specifications and price dictated by the buyer.

While they are Digital Command Control Systems built to meet the NMRA DCC Standard, they are usually low cost. With the low cost comes a price: They may not have all the features you need, or just a basic set of features. They may limit the number and type of addresses you can access, as well as programming capabilities. Often, they come in a package that resembles a power pack.

Another issue is future expansion: Many of these systems have limited expansion capabilities and may require expensive upgrades to break out of those limitations. Some basic systems may lack the capability to control stationary decoders or operate more than 10 locomotives at once. Others may not have any upgrade path, requiring the purchase of a new system. 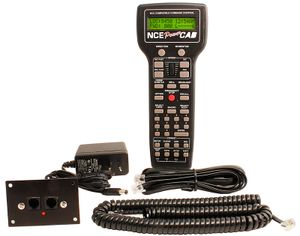 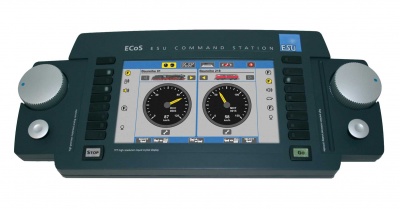 Starter Sets are much more capable Digital Command Control systems, and their price reflects that. Companies such as Digitrax, NCE and Lenz offer starter sets. Don't be fooled by the term "starter set", as they are full function DCC systems, built to offer you all the features DCC has, with future expansion in mind. Should you decide you want to do more, accessories can be purchased to give you the features you want, such as stationary decoders to control turnouts, or the ability to interface with a computer for layout automation.

A Starter Set can range from a basic, entry level system package at the low end of the price spectrum to an expensive package with wireless throttles at the other end. Everything you need to form the foundation of your Digital Command Control system is in the box regardless of price. The system will not put limits on what you can do in the future, expansion is usually much easier too. 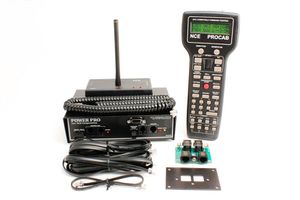 Some DCC systems offer a pair of outputs for a programming track. This allows a segment of track to be used for Service Mode Programming when configuring multifunction decoders. Those lacking the "program" outputs will still be able to program decoders. The danger is that Service Mode will program all the locomotives on the track the DCC system is connected to.

If you only want to run one or two locomotives, a small low current system will be adequate. Most of the DCC systems on the market deliver from three to ten amps of current to the track. A system designed for 5A (amps) or less is adequate for a small number of locomotives.

To determine how much current you need, prepare a power budget. Consider that the average HO locomotive will have a current draw of 500 mA (milliamps, in this case, 0.5A)[1]. If you have 10 locomotives you need ten times 500mA, or 5,000mA. Which is 5A. Now, your locomotives may draw more or less current. Larger scale locomotives will also have a higher current draw, so budget accordingly. A sound equipped locomotive will also require more current. On a small layout not all the locomotives will be in motion at the same time, additional boosters can be added later for more power if required.

If you only have three locomotives, the budget would be 1.5A, so a three amp booster would be more than adequate. Even with sound, you would probably be OK. 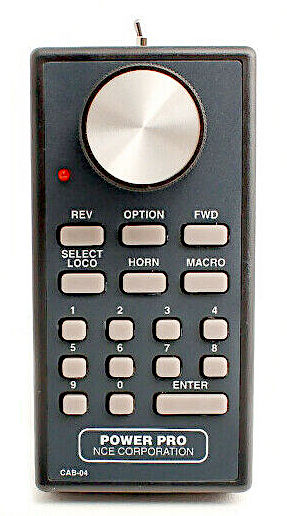 Another issue is the number of throttles the system can support. Maybe you don't plan to have operating sessions with 20 throttles in use. Or maybe you do...

Some systems may limit you to how many throttles it can support. Others can support a large number with no problems. Another consideration is the throttle network. Some implementations start to have problems with a large number of throttles and other devices in use, which leads to lag and network issues.

How difficult is it to interface the throttles to the throttle network? Are connection points easy to install and available at reasonable cost?

Another consideration: If you plan to host operating sessions, will the operators be expected to bring their own throttle? If so, consider the DCC systems they are using.

Some systems do not offer handheld throttles, others may allow you connect additional throttles. Throttles are specific to the brand of DCC system you chose, and you cannot use another manufacturer's throttles.

Another issue is how do they feel in your hand? Comfortable or bulky? Is there a display, can you read it easily? Does it display enough information? How does the throttle knob feel? These are all issues that can be important to you. Be sure to investigate the throttle's feel before making a purchase. 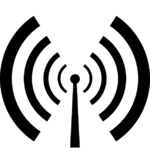 This is another question: Do you want to be able to operate with wireless throttles? They can be radio, or infrared in nature.

Can you add wireless operations later, or do you have to invest in a wireless system right from the start? Some systems will allow you to buy wireless throttles and associated components to obtain that capability. Others may not allow that, or have an expensive solution.

An alternative is a WiFi Throttle, using your iPod, iPhones, or Android devices. To use these additional components are needed, in the form of a wireless router and a computer interface, plus a computer running the software to process the signals from the throttle and send them to your command station. It is also necessary to install appropriate software on your device to enable it as a throttle.

The wireless router can also be used with your computer network, and allow you to wirelessly connect to the internet as well. Be sure to choose one that will work with your handheld devices.

If you want sound, you need a DCC system with the ability to control a sound decoder. For this, additional functions are needed, and the DCC system needs to be able to provide access to them. Some may limit you to only several functions, where a more advanced system will offer F0 to F12, or even more. Since sound decoders demand more current, the current limit (amperes) of the booster may not be enough for your needs.

The ability to address your locomotive fleet is important. Some systems may impose limitations, such as only 10 locomotive addresses, or limit you to a 2 digit address. If you want to use the locomotive's four digit number, you need a system that supports Extended Address.

Some basic systems limit the number of addresses available, the number of trains in operation or impose two digit addressing because their software doesn't allow for those features.[2]

If you are interested in Multiple Unit operations this is a necessary feature. All DCC systems offer Basic Consisting, while the more advanced systems can offer Universal or Advanced Consisting, which offer a lot more operating flexibility.

Again, this is determined by the software in the command station. 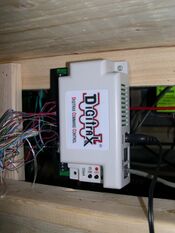 Sometimes called Stationary Decoders, these are used to control switch machines and other stationary animated devices. Some can be only controlled from the power or track bus, while others can be controlled by the throttle network as well. Most DCC systems can interface with a stationary decoder, but some basic systems may not be able to control them. The commands and addressing used is different, and the software in the command station must support that feature. 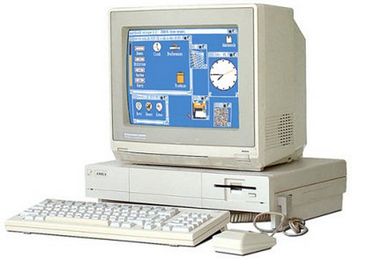 How difficult is interfacing your chosen DCC system with a computer? Yes, DCC operation is possible without a computer, but for some tasks you can't beat a computer with a full keyboard. Layout automation can also take place using a computer.

There are also devices such as the LokProgrammer from ESU which require a computer. The LokProgrammer can configure ESU multifunction decoders quickly and easily, load new sound files, and set the defaults for the decoder. While not absolutely required, they do make it easier. JMRI is also quite capable as well, but requires no additional hardware (except for the interface device).

Feel free to copy this list as an aid to determining the features you want in a DCC System.

Be sure to look at the Curated Videos Page: Videos:Contents.