Summary: The Univeral Panel is an interface to LocoNet, allowing throttles to be connected and disconnected from the throttle network. Using several panels, walk-around control of a train is possible.

A maximum of 10 panels can be powered from a PS14 power supply. Additional panels may not work correctly without the addition of another power supply.

The UP5 consists of a small PCB with 5 LocoNet jacks, a faceplate and an LED for track status. The LocoNet jack on the right is used for throttles only or other devices which can function with a LocoNet T connection.

The other RJ12 jacks are two LocoNet T for use with throttles on the front, the rear pair are LocoNet B used to daisy chain the device to other LocoNet devices such as additional utility and radio panels.

Two screws on the rear of the unit allow connection of a track feeder, which supplies the "Track Status" annunciator on the front. 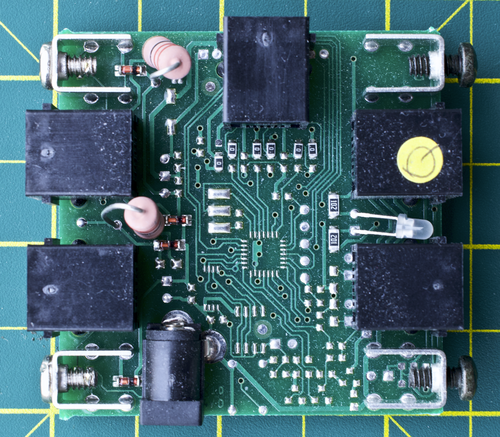 As the image to the left shows, there are five RJ jacks on the PCB. The two on the left side are LocoNet B, which pass through the RailSync signals to devices further down the chain. The jack at the top is a LocoNet T connection, as are the two on the right. The front panel will be fixed to the right side, the LED can be used to indicate track power is on. This is done by connecting feeders to the screws at the left side.

The bottom edge shows the barrel connector for an external power supply, which is recommended to avoid loading the RailSync lines.